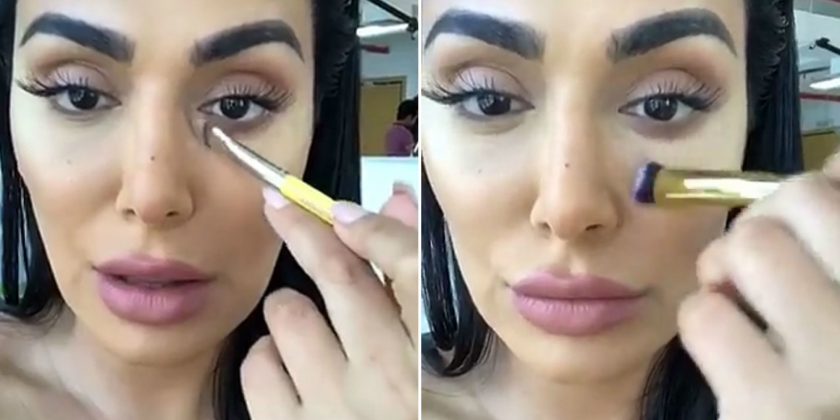 UPDATE (August 27, 2018 at 1:30 p.m.): There's been radio silence since early June when makeup mogul Huda Kattan teased what will be her first-ever concealer during the promo for her Facebook Watch series, Huda Boss. But now, thankfully, more details have been dropped. It all went down on Snapchat: Kattan shared several clips of herself on the set of the concealer campaign, which was quickly picked up and shared by the popular beauty news account, @trendmood1.

In a series of Snapchat snippets, Kattan is shown applying the concealer underneath one eye with a small brush and sharing what fans can expect from the not-yet-released launch. While she doesn't reveal too much, she does say that the formula is super buildable and can cover everything — that, and a little goes a long way. In the shots, it's evident that the concealer did an excellent job at both covering and brightening Kattan's undereye area, and it appears to blend out beautifully, too.

As expected, people went wild over the news and took to the comment section on Trendmood's post to display their excitement. "So excited for this! can't wait to try it!!!!" and "Excited yay ?? cannot wait," read two comments, which were among myriad similar reactions from fans. Sadly, no other details — including when it will launch — have been released yet, but we'll be sure to give fans an update as soon as its announced.

In the meantime, be sure to check Huda Beauty's Instagram for updates.

Compared to categories like eye shadows and lip colors, Huda Beauty's complexion makeup offerings have been limited so far. Although the brand launched in 2013, its #FauxFilter Foundation didn't launch until last October, along with the Complexion Perfection primer. And while several highlighter palettes have hit shelves and sites, one type of skin-enhancing product has been conspicuously absent: concealer.

Yesterday, however, Huda Kattan released the teaser for her new Facebook Watch series, Huda Boss (get it?!), and based on a few fast-paced shots and quick remarks, it seems Huda Beauty will finally be launching a concealer in the near future. "We’ve been working so hard on this concealer. It’s super high-quality, super luxurious," Kattan says as blink-and-you'll-miss-them moments show her swatching the shades on her arm with a doe-foot applicator. If the concealer is anything like the brand's foundation, it will come in an impressive shade range and flawlessly cover hyperpigmentation.

So, what took so long? Well, if another moment in the teaser is any indication, it can take a while to perfect a concealer formula so that it doesn't unflatteringly oxidize. "I put it on and I turned orange," Kattan says in a meeting. A little post-production magic then transforms her into the most glamorous Oompa Loompa you ever did see. Watch the entire minute-long video below:

Huda Boss will follow Kattan and her family behind the scenes of running Huda Beauty "to reveal what really happens when running a billion-dollar brand and uncover all of the personal struggles along the way," a press statement reads. "There is never a dull moment, especially when every moment includes the unfiltered opinions of family," which includes her sisters, Mona and Alya, and husband, Chris. Currently slated for 10 episodes, Huda Boss will debut a new video on Facebook every Tuesday, starting with June 12.

And from what we can tell from the teaser, it looks like it will be a great way to get the first sneak peeks at future Huda Beauty products.