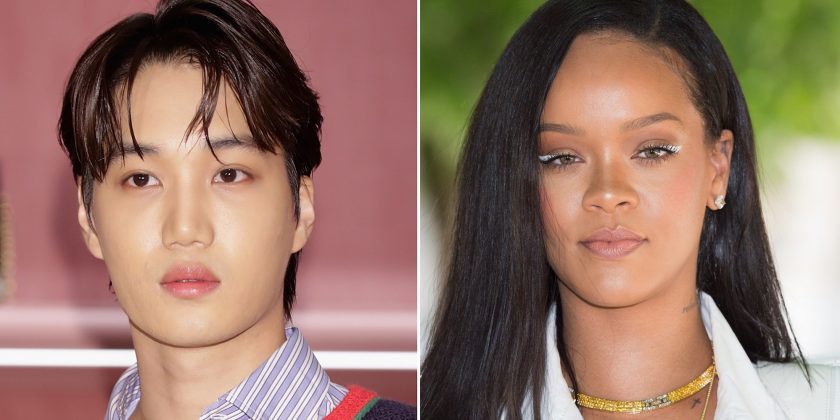 Seeing a brand comment on a K-pop star's Instagram with "Check your DMs" typically elicits an eye roll from me. However, I truly hope EXO's Kai does, so he can see what Fenty Beauty has in mind for him.

Rihanna's ultra-popular makeup brand slid into the DMs of the beloved Korean boy group member after fans got the hashtag #FENTYxKAI trending on Twitter. You don't have to think too hard about what a campaign starring Kai alongside Rihanna would look like because creative EXO-Ls (as EXO fans are officially called) used their expert Photoshop skills to create some seriously convincing mockups. They were enough to capture Fenty's attention. "Okay we see y'all… We're sending a DM ? #FENTYXKAI," the brand tweeted on Friday. EXO-Ls even did some detective work and noticed that Fenty followed EXO's manager, Noh Yongmin, on Twitter, and he followed the brand back.

Honestly, no other beauty collab has ever made more sense to me. Sure, I've been patiently waiting for the day when a K-pop star is signed as the face of a U.S. beauty brand. Kai and Fenty Beauty couldn't be a more perfect pairing, though. Kai is often unfairly called out for having a deeper skin tone than the other members of EXO, and in photos, he's known for being whitewashed via editing. Teaming up with a beauty brand that champions diversity in skin tones and representation would be a bold but fitting move for the modelesque performer.

I edited a trailer of Jongin x Fenty Beauty and it's clear that he's a perfect choice for the male face of the brand. This is such an amazing opportunity for him! ? #FENTYXKAI pic.twitter.com/1eoG5fO4m4

Of course, having Kai as a spokesperson for the brand would also prove that male K-pop stars help normalize makeup for men not only in Korea, but also in the U.S., where campaigns featuring men typically cast makeup artists and YouTube stars. Kai, on the other hand, is a 24-year-old musician who frequently performs in a smoky eye. Imagine him covered in a Fenty highlighter like Trophy Wife or even a limited-edition Body Lava. (Kai is certainly no stranger to sparkle.) That would be a gamechanger for the way boy beauty is viewed here.

Of course, the fact that EXO is currently endorsing K-beauty brand Nature Republic could present a conflict of interest that might stop the collab from happening. Some have also pointed out that Fenty could be looking to expand into Korea and may want a famous face to help promote the brand there. As much as I love that idea, the thought of a male K-pop star being named the face of an American ad campaign thrills me even more.

We'll just have to wait and see if Kai ends up checking his DMs — after all, Fenty x Kai would be a social media success story for the ages.