I grew up in a very conservative, small town in south New Jersey where I didn’t know many gay people. That made it difficult for me to wrap my brain around the fact that I could be gay, even though I had a feeling I might be “different” since I was young. I stayed closeted because I didn’t think openness was an option. But, there was one way I was able to embrace part of my truest self, in spite of what I kept hidden: sports.

I’ve been into mixed martial arts since I was 16 years old. Bored of traditional high school sports, I started watching MMA on TV and became obsessed. I wanted to be a professional fighter before women in MMA took off, and before the UFC even allowed women to fight. Because my mom has always been my biggest supporter, she’d drive me to an MMA training over an hour away from our home each day throughout high school. There, I’d practice jiu jitsu, boxing, and Muay Thai.

I have so many varied interests, though, so I was also pursuing acting, and at 19 I moved to Los Angeles to pursue both of my passions. In my early twenties, a mentor and friend of mine, Maria Menonous, asked if I’d ever considered World Wrestling Entertainment, better known as WWE, because it’s the best of both worlds of what I loved to do: fighting and acting.

At 21, I ended up auditioning for the reality show WWE Tough Enough in 2015. They flew me out to Orlando, and I fell in love. WWE is everything I love to do rolled into one—the performance, the competitive nature, the acting, the character roles. It’s the best of Hollywood and fighting mixed into a single profession. For me, WWE is a dream come true, but my introduction into this world wasn’t exactly easy.

Because of WWE, I came out on national television.

On the premiere episode of WWE Tough Enough, I had to do a ring interview while wearing a bikini and high heels. (This, by the way, is not the attire in which I’m most comfortable. Now, I perform in my signature tuxedos.) In the interview, which was meant to help introduce my persona to the WWE audience, one of the executives asked me if I was “in a relationship.”

I froze. I stalled. Everyone was watching. At that point, I wasn’t out to anybody aside from my mom, my dad, and my sisters. In my head, I thought, do I lie on national television? I knew if I avoided the truth, I’d have to explain why to my girlfriend, who I’d see at home. I decided to speak from my heart.

I said, “Yeah, I have a girlfriend,” and everyone just started laughing and smiling—but they weren’t making fun of me. The crowd could tell that I had never said that before, and they felt for me. They were laughing with me.

Initially, I felt awkward, but seeing how much support, cheers, and smiles I was receiving from the audience shortly eased my nerves. After the interview, people took me aside and asked, “Did you just come out on national television?” It was a wild moment. I remember running upstairs in the performance center and being like, Oh my god. What did I just do?

I had no regrets, though, and for the first time I actually felt genuine relief about my sexuality. It felt so good to just say it once and for all, and my cheeks hurt because I couldn’t stop smiling. I called my girlfriend and my family, who all told me they were just proud to see me finally show my true self to the world. 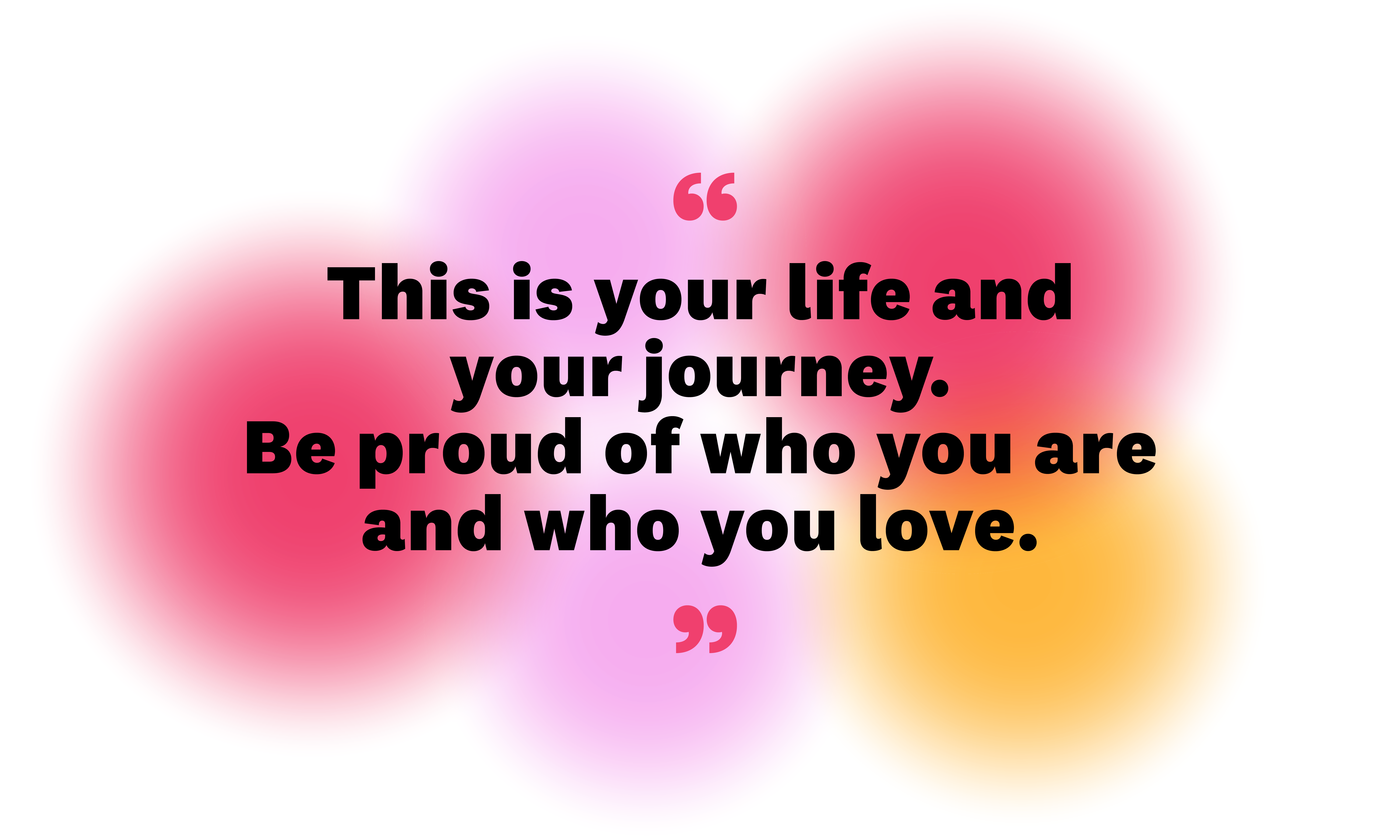 I realized how important coming out on TV was to others.

After coming out in such a public way, I was nervous and had all these mixed emotions: confusion, fear, excitement. To be honest, I thought being open about my sexuality was going to hinder my chances of making a name for myself in WWE. I didn’t know how the world and the WWE universe were going to perceive me, and I assumed it would impact me negatively. Luckily, and fortunately, it ended up being the opposite. I received nothing but love and support from the company and fans, both of which made it clear that my sexuality wouldn’t interfere with my WWE career.

About a year after the TV moment, I began to see just how impactful my coming out was for so many people. I’d received tons of messages through social media where people would say things like, “I saw you on TV, and you gave me the courage to come out to my parents,” or “Seeing you be so bold helps me feel comfortable with who I am and lets me know I’m represented in the WWE.” I realized that if I could use my openness to help other people, I’d also simultaneously become more comfortable with my own sexuality in my own skin—something that hadn’t been the case during most of my childhood.

It almost feels like, for the first 20 years of my life, I was wasting this amazing thing. And now, I want to scream it from the rooftops—as corny as that sounds. That’s why, as an out and proud adult, representation is so important in my work. Young people need to see that it’s okay to be a lesbian, or whatever sexuality and/or gender identity feels right to them. I just try to be myself and, hopefully, encourage as many people as I can to accept everybody, regardless of who they love.

Now, I dedicate my platform to promoting equality.

Because the reach of WWE is so widespread, I’m able to use my platform to create the change that I want to see. For the last six years, I’ve been using my social media channels to be a catalyst for equality, not just for the LGBTQ+ community, but to change stereotypical gender roles and promote gender equality in sport as well. I’ve partnered with groups like Comic-Con, The Trevor Project, GLAAD, the HRC Gala, and more to develop initiatives and campaigns that support and provide awareness to the queer community.

Had I not been put on the spot years ago, I may have waited even longer to come out, which would have felt suffocating. I feel as if I didn’t start really living my life until I was out, and now, I’m changing the WWE and the world simply by being who I’m meant to be. Yes, I work to be the best performer I can because of my love for the sport, but I also value paving the way for other LGBTQ+ folks in WWE and the industry more than anything.

Ultimately, I hope that sharing my story inspires others.

Coming out in any form is a personal journey, and everyone goes about it differently. Don’t ever be afraid to do it, but at the same time, don’t feel pressured to do so, either. Take your own path, and trust in finding your own timing.

That’s why I continue to share my story on WWE and other public platforms—to let people know it’s okay to be whoever you want to be. My biggest aim is to create a conversation that sparks change and promotes acceptance.

This is your life and your journey, so be proud of who you are, regardless of what you identify as or who you love.