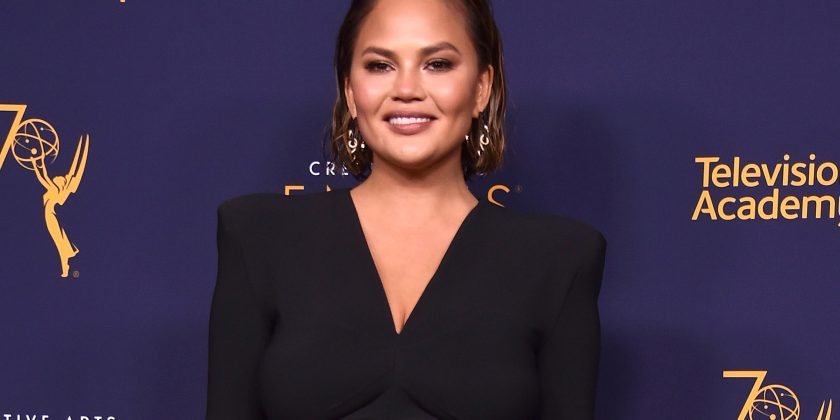 About a year after giving birth to daughter Luna, in April 2016, Chrissy Teigen penned a powerful essay for Glamour in which she described her experience with postpartum depression. In the essay, she says PPD left her unable to leave the couch for months at a time. Her experience in the months after welcoming son Miles in May, however, has thankfully been completely different. In a new preview of her upcoming interview with Rita Braver forCBS Sunday Morning's 40th anniversary primetime special (airing September 14), Teigen theorized why she was spared the pain of PPD this time around.

"It sounds ridiculous, but people have this belief that if you eat your placenta, it gets all those nutrients that you lost when you were pregnant, rather than just losing them immediately and losing that rush of endorphins," she said. "By taking these dry placenta pills, you can kind of keep this energy up and be weaned off that feeling more. And I didn't do that with Luna so…I remember looking back and being like, 'I shoulda ate my placenta!'" When Braver said she didn't think the cookbook author could include placenta as an ingredient in her cooking demonstration on the special, Teigen joked, "Really?! That's not a normal thing? I'm in L.A., it's very normal — they grill it here."

Though it's fantastic that Teigen hasn't experienced PPD after her second pregnancy, there's not actually any definitive research linking eating placenta to preventing depression or, in fact, to any other health benefits. According to Self, the Centers for Disease Control and Prevention actually recommends that new moms avoid eating their placenta in capsule form, since it could contain dangerous bacteria that can then be passed on to newborns via breastmilk or skin-to-skin contact.

Additionally, women's health expert Jennifer Wider, M.D., told Self that mothers who eat their placenta could also see an increased risk of blood clots as a result of ingesting extra estrogen. If you're worried about PPD or any other potential post-birth conditions, your best bet is to talk it over with your doctor, who can recommend a (scientifically sound) course of action.

The 32-year-old also described another major life change she's experienced since welcoming two kids and putting out two cookbooks. "I really prefer being happy and getting to eat things that I love, still wanting to be healthy," the former Sports Illustrated swimsuit model told Braver. "But I just don't care about looking good in a swimsuit anymore. I guess that's the only way to put it."

Just a few weeks ago, Teigen took to social media to talk about learning to love her body. "I think it's awesome people have killer bodies and are proud to show them off (I really do!!), but I know how hard it can be to forget what (for lack of a better word) regular ol' bodies look like when everyone looks bonkers amazing," she wrote on Twitter after sharing a video of herself after giving birth to her two children, complete with stretch marks. She added, "Also I don't really call this 'body confidence' because I'm not quite there yet. I'm still super insecure. I'm just happy that I can make anyone else out there feel better about themselves!"