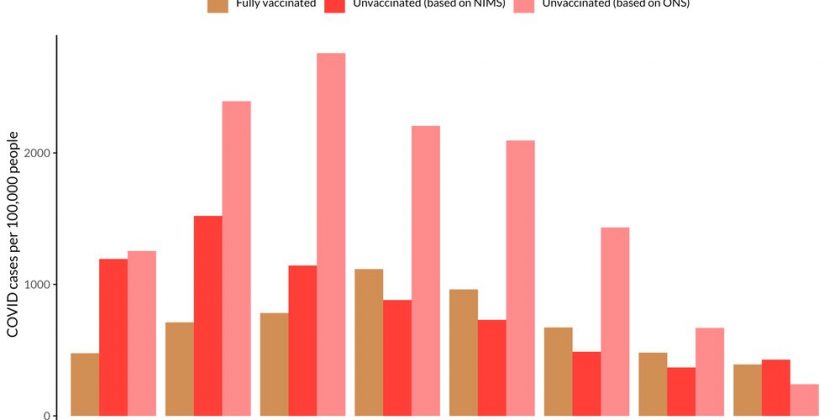 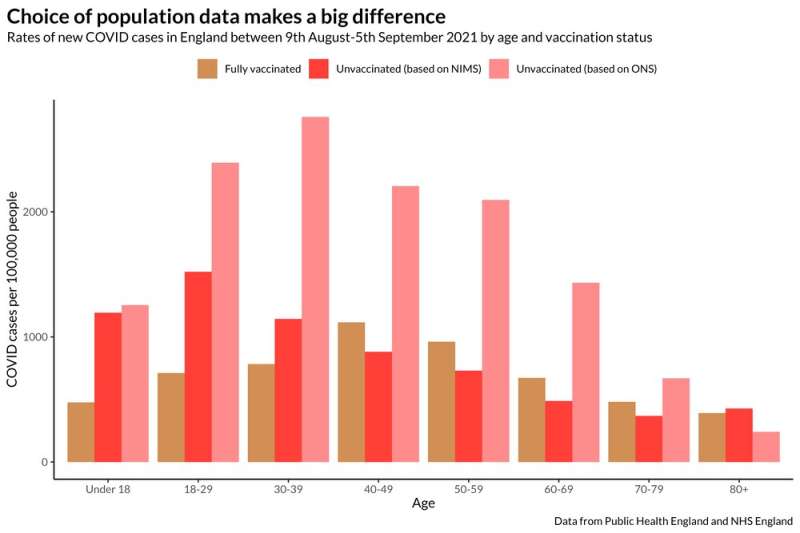 Recently, ITV journalist Robert Peston caught COVID, despite being double vaccinated. This set Peston wondering how common it is for the fully vaccinated to get the disease. His analysis is now complete.

The headline is fairly alarming: “Data shows infections high among double vaxxed for those aged 40 to 79.” Although, perhaps not as alarming as the Daily Express: “Peston lifts lid on COVID horror as infections spike in double-vaxxed 40- to 79-year-olds.”

So has Peston lifted a lid on COVID horror? Let’s take a closer look at those figures.

Peston’s conclusions are based on newly published data from Public Health England which shows us how many of the new COVID cases, emergency hospital admissions and deaths during the four weeks up to September 5 were among unvaccinated, partially vaccinated, or fully vaccinated people. These numbers give us the first clear indication of how effective COVID vaccines are at protecting people from getting COVID or from suffering serious ill health in those unlucky enough to catch the bug.

On the face of it, the case numbers appear concerning. Of the 554,896 new COVID cases recorded in adults over this period, over half (50.6%) were in people who had already had two vaccine doses. In comparison, just one in five cases were in adults who haven’t yet had a single jab.

But looking at just the raw numbers obscures the fact that 73% of people aged 18 and over in England are already double-jabbed. So it makes more sense to look at case rates: the proportion of unvaccinated and fully vaccinated people who tested positive for COVID. Peston’s concern is that even when we do this, in 40- to 79-year-olds, case rates are higher in fully vaccinated groups. Does that mean that the delta variant has overcome the protection of vaccines for older adults?

We don’t know how many people are in England

In short, no. The crucial factor that Peston’s analysis has missed is that, in order to estimate these case rates, we need to know exactly how many vaccinated and unvaccinated people there are in the country.

There are two main sources we could use for these figures: population estimates from the Office for National Statistics (ONS), and figures from NIMS, the National Immunisation Management Service. The latest available ONS figures are based on the 2011 census, adjusted for births, deaths and estimated migration. NIMS figures, which are used in planning the vaccination program, are based on GP records. Inconveniently, the figures don’t agree. ONS estimates there are 44.5 million adults in England, while NIMS has a higher figure of 49.5 million.

Both of these figures are definitely wrong, at least to some extent. The ONS figure is for mid-2020 and so doesn’t capture the large number of excess deaths we have seen during the pandemic. Meanwhile, NIMS data can count the same person several times if they have changed GP practices but still appear on the books of their old surgery. And both sources are unlikely to fully capture the effect that both Brexit and the pandemic have had on migration.

Why does this difference matter? Well, where we have high vaccination coverage, it means we are very uncertain about how many unvaccinated people there are. Over 39 million adults have received at least one vaccine dose. NIMS figures suggest that leaves 10 million unvaccinated, while ONS says it’s just 5 million—a full 50% lower. The PHE figures that Peston has highlighted use NIMS population estimates. If instead we calculate these figures using ONS estimates, then the concern he highlights disappears, and case rates in all ages below 80 become substantially lower in the fully vaccinated.

While there are good reasons why PHE use NIMS figures, most commentators agree that ONS estimates are likely to be closer to the true population for all but the oldest age groups. As a result, the real story in this data is that it is very likely that being fully vaccinated does reduce your chance of catching COVID. More importantly, other data in the same report shows that rates of emergency hospital admission and death are hugely lower for the fully vaccinated across all age groups.