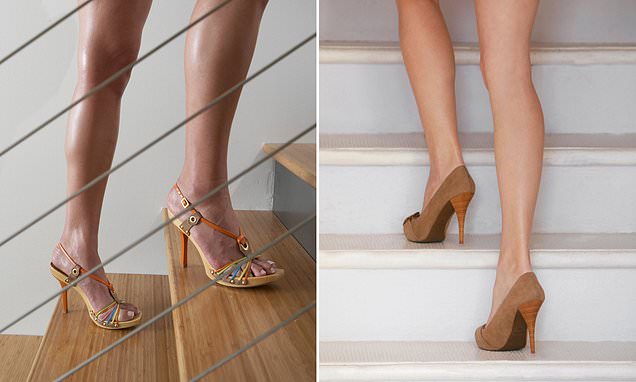 Why a home with no stairs can give you ‘bungalow leg’: Experts warn that steps can provide crucial exercise that may slow ageing

To many people, moving to a bungalow makes good sense — if aching or immobile joints become a problem then a life without stairs is not only simpler, but also much safer.

However, experts warn that making that move too early can actually hasten the decline associated with old age, leading to a phenomenon now being dubbed ‘bungalow leg’.

The term refers to the gradual weakening of muscles in the leg, which is often apparent in people who have moved to a single-storey dwelling and are living without the challenge of stairs. 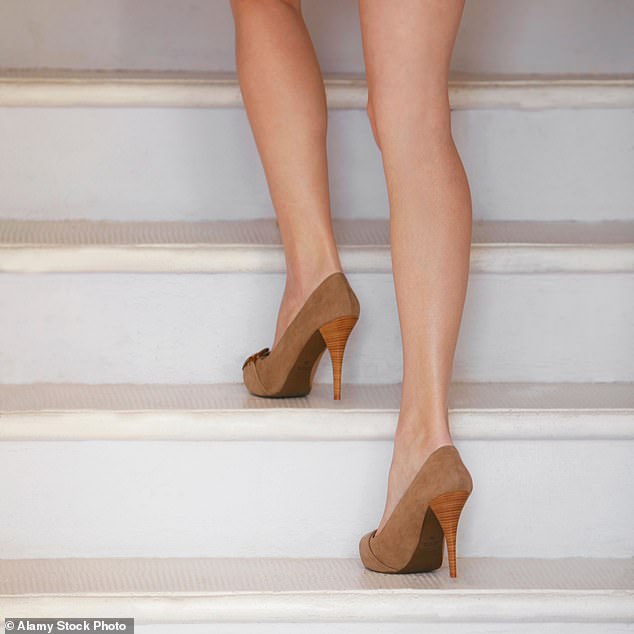 When you stop doing things, you lose the ability to do them, says Victoria Rendle, a physiotherapist based in Devon, who specialises in treating elderly patients [File photo]

‘There is a deconditioning element associated with moving into a bungalow and a definite concern that moving may hasten decline,’ says Dr Carolyn Greig, a reader in musculoskeletal ageing and health at Birmingham University.

‘Climbing stairs is a very good way of maintaining or improving muscle strength and muscle power. If there is a significant number of stairs it also provides an aerobic challenge as well.’

How much your home directly contributes to any physical decline was the subject of a 2018 study in Japan, involving more than 6,000 people aged 65 or over who lived in either a single-storey dwelling, a home accessed by a lift, or a home with stairs, who were monitored for three years.

The results, published in the journal BMC Geriatrics, found that having stairs in the home appeared to help hold back age-related physical decline.

When you stop doing things, you lose the ability to do them, says Victoria Rendle, a physiotherapist based in Devon, who specialises in treating elderly patients.

‘What commonly happens among older people is that the deterioration has already started before they downsize to a bungalow. But if you then take the stairs away and lead a more sedentary life, you may hasten that decline further.’

She adds: ‘Of course things happen when you age, but many mobility issues are due to bad movement habits which people develop when they have a bad back or injury but which remain when the pain has been resolved.’

‘Instead of addressing underlying problems such as stiff, sore or weak muscles, there’s a misconception it’s purely ageing. Yet often these things can be addressed. Seeing a physio who can work out what is working or not and keeping as active as possible are key.’ 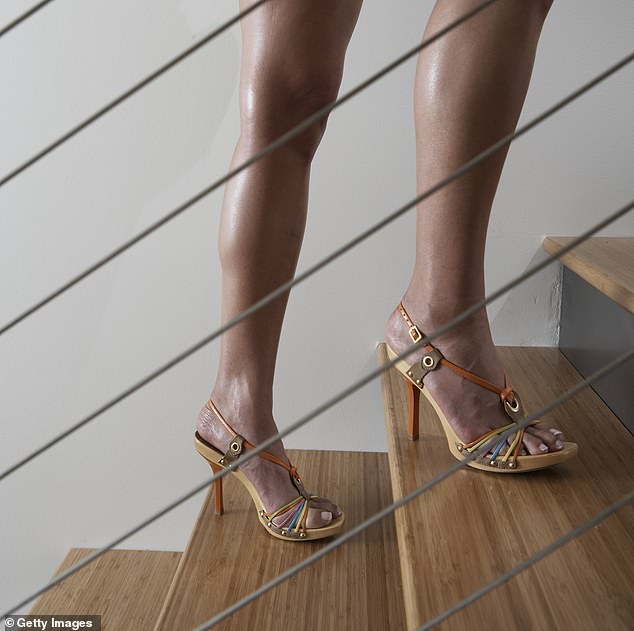 Experts warn that making that move too early can actually hasten the decline associated with old age, leading to a phenomenon now being dubbed ‘bungalow leg’

The beauty of going up and down the stairs is that it engages four key muscle groups and keeps key joints strong.

‘People commonly think of quads, which are at the front of the thigh,’ says Victoria.

‘But you are also using the glutes in your buttocks, hamstrings and calves as well, and you need to have a good range of movement in your ankles in order to place your feet properly on the step. Stiff ankle joints are a common thing we see in older clients who have moved to bungalows.’ The shift to a bungalow often happens at a time when people have reduced muscle mass anyway — and the saying ‘use it or lose it’ becomes truer than ever, says Dr Greig.

From your 40s onwards you lose 0.5 per cent or slightly more of your muscle mass per year. ‘So by the time you are in your 80s you have half to two-thirds of the muscle mass you had when you were younger,’ says Dr Greig.

Then there is autophagy, the process that allows the body to clean up damaged cells.

Thirdly, muscles have stem cells called satellite cells that enable the repair of damaged muscle fibres. Finally, you have the mitochondria, the ‘batteries’ found in all cells that help produce energy, in this case for the muscle to work and repair.

‘All these four things decline in number and efficiency as we age. But the good news is that exercise improves them, even in ageing muscles,’ says Victoria.

‘So an athletic 80-year-old could have the muscle mass and function of a much younger person. Exercise stimulates each of these processes to do more.’

And while many people may move to a bungalow as they fear falling down the stairs, the decline that they may experience in the muscle strength from not using stairs might make a fall more likely.

‘Muscle power is key for maintaining balance and preventing falls,’ says Dr Greig. ‘We know that exercise, and particularly exercise which improves balance such as getting up out of a chair, can reduce falls so it is important to stay active.

‘If someone starts to lose their confidence around their home, then before they take the major step of moving, it may be that occupational therapists can make adaptations to the home, such as installing a hand rail or grab rail at the top of the stairs.’

However, there can come a point when it is no longer safe or hurts too much to use stairs.

‘People start hauling themselves upstairs using their arms, and that’s not a good sign,’ says Victoria. ‘Back pain and arthritis in the knees and hips are commonly things that make climbing stairs uncomfortable. At that stage, single-floor living or a bungalow might be a good option.’

Whether a move to a bungalow is vital now, or you are planning ahead, it’s important to compensate for less challenging home environments.

Depending on your range of movement, there are other things you can do that work the same muscle groups as stairs, says Rebecca Sessions, a physiotherapist in Stotfold in Bedfordshire.

‘When you get up out of a chair, sit down and stand up three times to work your quads,’ she says. ‘While you wait for the kettle to boil, march on the spot and get your knees up as high as you can. If you do it five or six times a day, it builds up without feeling like formal exercise.’

Even in a bungalow, there may be a step up to the front door or into the garden, which can be used as part of a fitness programme, says Mandy Wong Oultram, who is a personal trainer based in Macclesfield.

‘Stepping up and down will work quads and hamstrings, and you can hold a light dumbbell to make it harder. Two sets of ten to 15 repetitions on each leg once a day, with 60 seconds of rest in between, is a good place to start.’

Victoria says: ‘However old you are, it’s important to add repetitions, gradually increasing from one set of steps to two, or the number of chair rises you do — otherwise you are not stimulating your muscles.’

Bungalow-dwellers should also think carefully before investing in an electric riser recliner chair. ‘One of the tests we use to assess older people’s functional ability is to see whether they can rise from a chair without using their arms,’ says Dr Greig.

‘It’s an important movement because if you are not able to get up from the loo then you will need help, and that is a major compromise of physical independence.’

Instead, people should raise the height of the chair. Rebecca Session says: ‘If you are struggling to get in and out of your chair, buy chair raisers for the legs or a firmer cushion to make it easier.’

The good news is that it’s never too late to improve on muscle strength, says Dr Greig.

‘It depends what stage you are, how frail and what’s safe to do: stairs may not be the answer, but you do need something,’ she says.

‘It’s difficult when you’re older to grow your muscles but you can certainly strengthen them.’

Citric Acid: A weak edible acid that occurs naturally in citrus fruits. When combined with sodium bicarbonate in Berocca, it has effervescent properties, creating the fizzing effect when a tablet is dropped into water.

They directly affect energy levels (for example, helping with metabolism and releasing energy from food), and a lack of B vitamins could leave you feeling drained.

Beta carotene: A source of vitamin A, which is well known for maintaining eye health but is also an antioxidant (helping to protect your cells) and a carotenoid, which contributes to the orange colour.

Viagra may improve fertility in older women. In a trial with 66 women aged 38 and over, the drug led to an increase in IVF pregnancies when administered internally. The success rate was double that of those given a placebo, reported the International Journal of Fertility. Researchers suggest it may enhance blood flow to the uterus, improving conditions for an egg to implant.

Tomatoes reduce the risk of stroke by up to 59 per cent according to a study published in the journal Neurology.

This found that men with the highest versus lowest blood levels of lycopene — the red pigment in tomatoes — had a significantly reduced risk of stroke caused by a blood clot over the following 12 years.

Other research supports the role of lycopene in cardiovascular disease and has shown it has antioxidant and anti-inflammatory effects. These qualities could explain why lycopene has also now been linked with a lower risk of an enlarged prostate.

Cooking tomatoes using oil increases the lycopene absorbed by the body, so soup and passata are good choices.