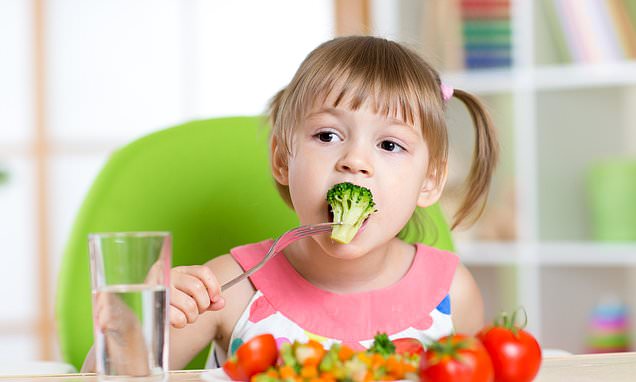 Vegetarian children are nearly TWICE as likely to be underweight as those who eat meat, study finds

Vegetarian children are nearly twice as likely to be underweight as their meat-eating peers, a study has found.

Researchers led by St Michael’s Hospital in Toronto, Canada, tracked 9,000 children — including 250 vegetarians —  from about their second to fifth birthdays.

Those who stuck to a plant-based diet had the same height, body mass index (BMI) and nutrition on average as those who ate meat.

But they were also up to 94 per cent more likely to be underweight when their BMI was calculated.

Scientists suggested this may be because a plant-based diet does not contain enough nutrients for growing children.

But they added it might also be due to more Asian children being vegetarian, who BMI is more likely to show as being underweight. 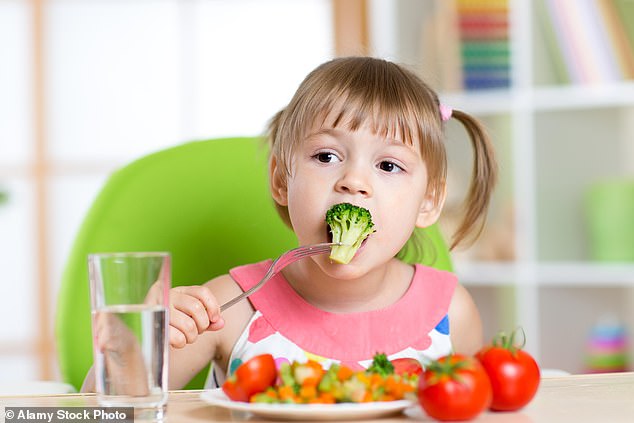 Vegetarian children were nearly half as likely to be underweight as their peers, a study found (file photo)

Being a vegetarian has never been more popular in the U.S. in modern history, with about 10 percent of people now saying they only eat plant-based foods — compared to two percent as many decades ago.

Many health experts say it is perfectly possible to get all the nutrients you need with a ‘well-planned’ vegetarian diet.

But some European countries have warned against giving youngsters a vegan diet — which excludes eggs and milk — because of the risk of malnutrition.

The below is what vegetarians should eat to remain healthy.

Doctors say that contrary to popular belief, most vegetarians get enough protein and calcium in their diet:

In the study — published in the journal Pediatrics — scientists used data from the Canadian TARGet kids! study, which monitored the children up to 2019.

There was an even gender-split among participants, and nearly two-thirds were of European descent.

This was similar to the vegetarian group, where 79 percent (192) were also a healthy weight.

But in the underweight category, only about three percent of meat-eaters (274) were included.

For comparison, a total of six percent of vegetarians (15) were marked as underweight.

Dr Jonathon Maguire, a pediatrician at the hospital who led the study, said: ‘Vegetarian diet was associated with higher odds of underweight weight status.

‘This underscores the need for careful dietary planning for children with underweight when considering vegetarian diets.’

He also suggested the results could be down to more Asian children being in the vegetarian group.

BMI is calculated by dividing weight by height, but experts warn it is an imperfect measure because it can’t account for age, sex and ethnicity among other factors.

The study also found that meat-eating children were more likely to be overweight or obese, at 18 percent of the group (1,522 people), than vegetarian ones, at 14 percent (34 people).

Both groups had similar levels of cholesterol, triglycerides — a type of fat — and serum ferritin — a measure for iron content.

The scientists had suggested at the start of the study that vegetarians may have less iron because they are not eating any meat.

The paper also included 25 children who were vegans, but this group was too small to measure against the others.