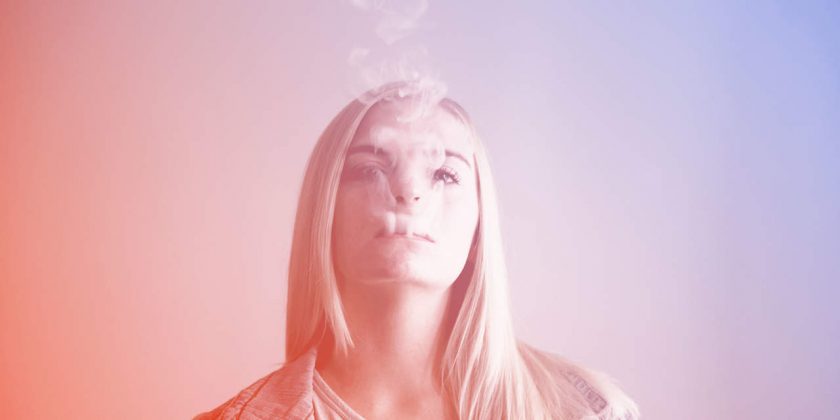 Vaping continues to be at the forefront of the public health dialogue—multiple people have been hospitalized as a result of severe lung damage from vaping, and e-cigarette use has also been linked to seizures among those who vape. Now, vaping is also being linked to a severe type of pneumonia. That’s what happened to Aubree Butterfield of Utah, who was diagnosed with lipoid pneumonia in July.

She isn’t the first person to develop lipoid pneumonia from vaping. Last year the story of another patient who developed the illness from vaping was published in BMJ Case Reports. According to the case report, the young woman was admitted to the hospital with respiratory failure. So what's going on here? How do e-cigarette users develop this rare, potentially dangerous type of pneumonia? Here's what you need to know.

What is lipoid pneumonia?

Lipoid pneumonia is caused when lipids (which are, essentially, fatty acids) enter the lungs, causing the lungs to become inflamed. (FYI: Regular pneumonia is an infection that causes inflamed air sacs, or alveoli, in the lungs.) Butterfield, specifically, was found to have vegetable glycerine in her lungs, which can be found in electronic cigarettes.

According to the University of Utah Health Hospitals and Clinics—which is also where Butterfield was treated—lipoid pneumonia was previously associated with oil-based laxatives and accidental aspiration or inhalation—but with the rise in vaping, it's also being associated with the use of e-cigarettes.

Here's how it works, according to Andrew Freeman, MD, a pulmonologist with University of Utah Health: The oil contained within vaping cartridges is heated up to produce a vapor—and within that vapor, may be "tiny aerosolized droplets of lipids, which can be inhaled,” Dr. Freeman told the university. “When large enough amounts of lipid droplets are inhaled into the lungs, they can cause irritation and damage to the lung, leading to the condition termed lipoid pneumonia," he added.

In her interview with The Sun, Butterfield noted that she began vomiting and coughing up blood—which sent her to the emergency room. The University of Utah also says lipoid pneumonia can cause chest pain, difficulty breathing, chronic coughing, and coughing up blood—and can be similar to some symptoms of bacterial pneumonia.

Treatment for lipoid pneumonia includes the use of steroids, per the University of Utah—which both Butterfield and the patient in BMJ Case Reports were prescribed. Butterfield also wrote on Facebook that her treatment routine consists of being on oxygen, potentially for several months, and taking antibiotics. “The doctors don’t know how long my lungs will take to heal because this is such a new thing,” she wrote in a Facebook post.

07/16/19
The day I was life flighted to the University of Utah hospital to the ICU. The day that I realized my life…

But left untreated, lipoid pneumonia can be fatal—and Butterfield acknowledged that in her Facebook post. "I am living proof that vaping can KILL you. You know what the worst part is? Yes, I vaped, but I didn’t vape daily. Or even close to daily.”

She added that she was hesitant to share her story with the public, for fear of being judged. “But it is worth it if I can at least save one life,” Butterfield wrote. “Vaping has been around for such a short amount of time and isn’t even FDA approved meaning they can put anything they want in it and people are just inhaling that into their lungs.”

Lipoid pneumonia seems to be one more reason that vaping isn't necessarily safer than smoking cigarettes. And while the CDC says that e-cigarettes can potentially help people who are addicted to regular cigarettes, they’re still dangerous for people who don’t smoke. “If you’ve never smoked or used other tobacco products or e-cigarettes, don’t start,” the CDC warns.

To get more real talk on health and wellness, sign up for our weekly WomenIRL newsletter