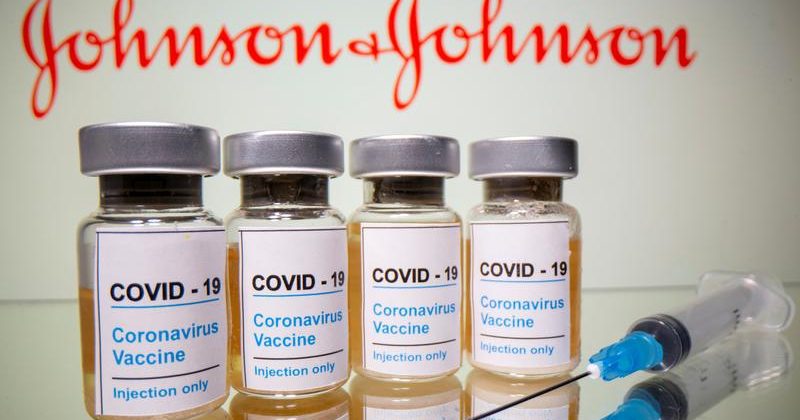 WASHINGTON (Reuters) -A U.S. health advisory panel on Wednesday began a review of six reported cases of rare blood clots in women who received Johnson & Johnson’s COVID-19 vaccine, a day after federal regulators paused its use to assess the issue.

FILE PHOTO: Vials with a sticker reading, “COVID-19 / Coronavirus vaccine / Injection only” and a medical syringe are seen in front of a displayed Johnson & Johnson logo in this illustration taken October 31, 2020. REUTERS/Dado Ruvic

The cases, all in women under age 50, were reported out of 7.2 million doses of the J&J vaccine administered in the United States – a risk federal health officials and immunology experts said was extremely low, especially when weighed against the potential ravages of COVID-19.

One of the six women died and three remain hospitalized. So far, more than 562,000 people in the United States have died from COVID-19.

Johnson & Johnson has not seen brain clots in recipients of its Ebola vaccine or its vaccine against respiratory syncytial virus (RSV), which use similar technology, nor in its ongoing trial of a two-dose regimen of the COVID-19 vaccine, according to a company presentation to the advisory panel.

Those other vaccines were used on much smaller patient populations, so a very rare side effect would be less likely to turn up.

Top U.S. health officials, meanwhile, at a separate briefing on Wednesday urged Americans to keep their vaccination appointments as other authorized vaccines fill the void.

However, J&J’s vaccine has been seen as a critical option to expand protections to harder-to-reach populations in the United States and elsewhere.

The U.S. Centers for Disease Control and Prevention’s (CDC)immunization panel may vote on updated recommendations for the vaccine later on Wednesday, although whether to hold a vote and what it would be has not been established.

“There’s a full range of options on the menu,” said Dr. William Schaffner, an infectious disease expert at Vanderbilt University Medical Center and a consultant to the panel.

The CDC told doctors in a Tuesday bulletin that it was recommending a pause in J&J vaccinations until the advisory committee reviewed the cases and assessed implications. The U.S. Food and Drug Administration will look at the advisory panel’s analysis as it does its own investigation, the CDC said.

The FDA said the halt should only last a few days and was needed to help physicians understand how to recognize and treat the issue as a standard treatment for clotting could cause serious complications or death.

Dr. Anthony Fauci, President Joe Biden’s chief medical adviser, on Wednesday told CNN the pause in administering the J&J shot would allow regulators to see if there were other possible clot events, but that he did not think there would be many more such cases.

Fauci on MSNBC said it was up to the regulatory agency but that “very likely, they’ll say we looked at it, and now we will go back, maybe make some modifications.”

J&J has said no clear causal relationship has been established between the clots and its vaccine, but that it was working closely with regulators in the United States and Europe, where it also voluntarily paused its rollout. Similar rare brain blood clots have been reported with AstraZeneca’s vaccine in Europe, where it was decided the shot’s benefits outweigh the clotting risk.

J&J shares were near flat in midday trading on Wednesday, after closing down 1.3% on Tuesday.