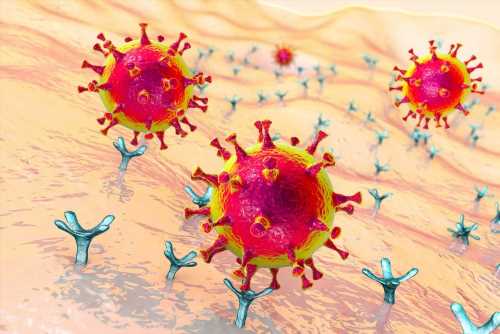 A study posted to the bioRxiv* preprint server tested the hypothesis that the angiotensin-converting enzyme 2 (ACE-2) receptor of severe acute respiratory syndrome coronavirus 2 (SARS-CoV-2) is not only an attachment factor in viral infection but also plays a role in activating the viral spike protein to facilitate membrane fusion.

The SARS-CoV-2 virus infects human cells with the help of the host ACE-2 receptor. The viral spike protein governs the entry of SARS-CoV-2 and infection as it binds to the ACE-2 receptors on the surface of the human cell. ACE-2 is activated through proteolytic cleavage and drives fusion between the cellular membrane and the viral envelope.

Circumstantial evidence from studies suggests that ACE-2 may not just serve as an attachment factor but may also help activate the SARS-CoV-2 spike protein for membrane fusion. A better understanding of the role of ACE-2 in membrane fusion can help illustrate the mechanism behind SARS-CoV-2 infection and predict the future evolution of SARS-CoV-2 and other similar viruses.

In the present study, the researchers used deoxyribonucleic acid (DNA)-lipid tethers as they can insert into membranes irreversibly and allow programmable self-assembly.

Using this approach, complementary DNA strands conjugated to lipids can be inserted in viral particles so synthetic liposomes can target the particle without needing physiological receptors. The triggers needed for fusion are then chemically reconstituted and tested. Fusion is detected with the help of single-virus optical microscopy, where the changes in viral state during fusion are monitored using fluorescent dyes. Researchers have previously used the DNA-lipid tethering approach to characterize viral entry by various families of viruses, including flaviviruses and orthomyxoviruses.

The researchers measured spike-dependent binding and fusion to synthetic as well as cellular membranes, with the help of synthetic liposomes, to ensure the absence of the ACE-2 receptor. Three SARS-CoV-2 spikes – D614G/N501Y, Wuhan, and Omicron (B.1.1.529) – and two viral particle types – virus-like particles (VLPs) produced by expressing S, M, E, and N proteins and pseudoviruses on an HIV core – were used in the experiments.

Fusion events were found to occur only when viral particles were attached to target membranes and when protease was present. Fusion was mainly monitored using lipid mixing between the target membrane and the viral particle and detected through Texas Red dye dequenching in the viral envelope, which led to fluorescence enhancement. DNA-mediated virus-ACE-2 binding was specific; the number of adsorbed particles decreased more than 25-fold when DNA was omitted. Similarly, there were no fusion events in the absence of exogenous protease.

On comparing the viral fusion kinetics of the Omicron and Wuhan spikes pseudotyped on HIV cores and Wuhan D614G/N501Y VLPs used in this study, the team found that while both the pseudoviruses showed similar fusion rates, the VLPs yielded slightly but significantly faster fusion rates.

The observed difference in fusion rates could be due to a variety of factors, including spike protein density variations on the VLPs vs. the HIV core, E and M proteins in the VLPs, the D614G/N501Y mutations, and the active spike percentage on the VLP surface.

When the protease utilized for activation was varied in the Omicron and Wuhan experiments, fusion rates were not sensitive to the concentration of protease in the 200 to 1000 µg/mL range. In agreement with prior reports, transmembrane protease, serine 2 (TMPRSS2) was not efficient in activating Omicron spikes for membrane fusion. However, in the case of D614G/N501Y particles, the addition of 40 µg/mL TMPRSS2 resulted in a different fusion kinetics from 200 µg/mL trypsin.

These observations suggest that proteolytic cleavage may not be the rate-limiting step for membrane fusion of DNA-tethered VLPs, as changing the concentration of protease should affect the formation of enzyme-substrate complex and changes in protease identity should alter fusion kinetics.

On the addition of soluble ACE-2 simultaneous to protease, a significant increase in the speed of lipid mixing kinetics was observed in experiments using both Wuhan and Omicron spikes. This shows that although the spike protein conformations needed for membrane fusion are accessible without ACE-2, the ACE-2 receptor promotes spike conformations that favor membrane fusion.

Overall, the researchers observed that on activation using an appropriate protease, SARS-CoV-2 pseudoviruses, as well as VLPs, do not require ACE-2 for membrane fusion. However, adding soluble ACE-2 sped up the fusion reaction in the SARS-CoV-2 Wuhan strain and the Omicron variant. The results of the kinetic analysis revealed a minimum of two rate-limiting steps for viral membrane fusion. One of the steps was ACE-2 dependent, while the other was not.

The above findings confirm that the ACE-2 receptor is not biochemically needed for SARS-CoV-2 membrane fusion if an alternative attachment factor is present. Since ACE-2 acts as a high-affinity factor for viral attachment on human cells, replacing it with other attachment factors, however, may affect the ability of SARS-CoV-2 to evolve and the viral fitness environment for coronaviruses emerging in the future.

bioRxiv publishes preliminary scientific reports that are not peer-reviewed and, therefore, should not be regarded as conclusive, guide clinical practice/health-related behavior, or treated as established information.

Susha has a Bachelor of Science (B.Sc.) degree in Chemistry and Master of Science (M.Sc) degree in Biochemistry from the University of Calicut, India. She always had a keen interest in medical and health science. As part of her masters degree, she specialized in Biochemistry, with an emphasis on Microbiology, Physiology, Biotechnology, and Nutrition. In her spare time, she loves to cook up a storm in the kitchen with her super-messy baking experiments.