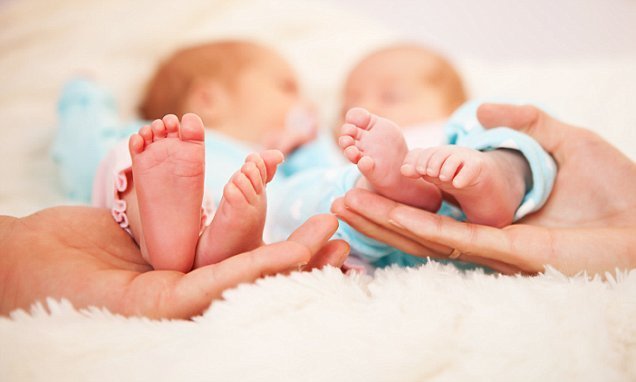 More than 50 twin babies are dying each year because some NHS hospitals are failing to follow official guidance on multiple births, new research has revealed.

Health authorities recommend, for example, that women expecting twins be seen by a specialised team of medics, have extra scans during pregnancy and the babies are screened for Down syndrome.

But an audit, funded by the Department of Health, has found 42 per cent of larger maternity units aren’t following the guidance – and nor are 61 per cent of smaller units.

Twins and other multiple births need special care because they are more likely to die in the womb or as infants, and have lower birth weights and a higher risk of disability.

A campaign group says it is ‘pot luck’ for mothers whether they give birth in an NHS hospital which has any experience in delivering twins.

The Twins and Multiple Births Association (Tamba), which led the research, called the results ‘worrying’ and said babies’ lives can be saved if guidelines are followed. 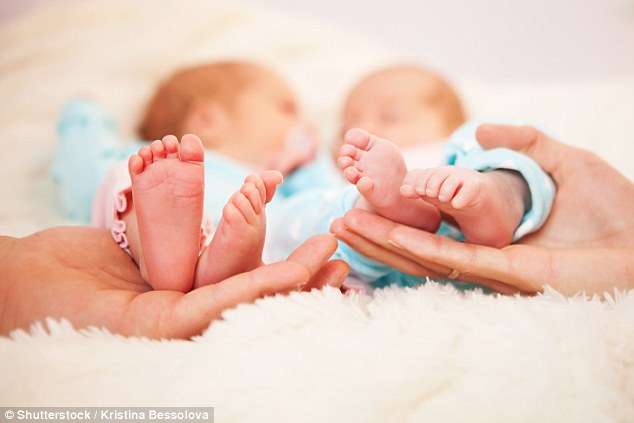 In the first research of its kind, Tamba claims a fifth of the 270 deaths of twin babies younger than a month old could be avoided.

This equates to around 55 babies who could be saved every year by hospitals following multiple birth guidelines from the National Institute for Health and Care Excellence (NICE).

The NHS could also save millions of pounds in neonatal care and lawsuits – multiple births make up 10 per cent of maternity clinical negligence claims, the charity says.

Around one in every 225 pregnancies result in a stillbirth in the UK, and Tamba’s research reveals deaths in twin births are lower in hospitals which follow NICE guidance, which includes having a specialist team for multiple births.

Keith Reed, Tamba chief executive, said: ‘What’s worrying is many maternity units do not have such a team in place to begin with and it’s down to pot luck if you have healthcare professionals who are experienced in multiple births.

‘The figures clearly show the benefits of adopting national clinical guidance of care for families of multiples.

‘We can safely assume that if all our recommendations were adopted then babies’ lives could be saved.

WHAT ARE THE RISKS OF HAVING TWINS?

Women expecting twins are automatically placed in a ‘high-risk’ pregnancy category because there is more potential for things to go wrong than with a single baby.

Multiple babies are more likely to die as infants or in the womb, and also have a higher risk of disability.

But the vast majority of twins are healthy pregnancies and babies.

Some of the complications which are more likely in women going through a multiple pregnancy may include:

Anaemia: A shortness of red blood cells, which can be treated with a diet rich in iron.

Vaginal bleeding: One in four multiple mothers report some vaginal bleeding – it is often harmless but should be reported to a doctor.

‘We also know that fewer babies would go into neonatal care which could potentially save the NHS in England £3.82 million a year.’

Good communication between expecting parents and medical professionals is key to having a healthy delivery, the charity says, as is closely monitoring babies’ development.

Negligence claims cost the NHS £2.2 billion last year, The Times reported, with half of those payments because of errors made during childbirth.

And, although only 1.6 per cent of births are twins, they are estimated to make up around 10 per cent of negligence claims.

Edward Morris, vice-president of the Royal College of Obstetricians and Gynaecologists, described the study as ‘extremely concerning’.

He said: ‘We urge maternity services to follow best practice.

‘Any woman carrying more than one baby must have access to accurate information, including a discussion over delivery method and postnatal wellbeing.

‘A multi-disciplinary approach is particularly important as this was shown to reduce risk of stillbirth and this should include input from midwives, obstetricians and ultrasonographers to help ensure any complications are picked up and managed effectively.’

Jackie Doyle-Price, the health minister, added: ‘We want the NHS to be the safest place in the world to give birth.’

Tamba has designed the world’s first twin-pregnancy growth charts and hopes they will be used by all mothers expecting multiple babies.

The charity spent £25,000 developing the charts because most hospitals currently use charts for single babies to plot the children’s growth which, Tamba says, can be inaccurate because twins are naturally smaller.

Dr Asma Khalil, consultant obstetrician and leading multiple births expert at St George’s Hospital in London said: ‘This is the first national programme of its kind, funded by the government, aiming to improve the quality of care to save lives and improve health and give these multiple babies the best start in life.

‘The key finding is that implementing NICE guideline should improve the outcomes of multiples.

‘Therefore we need to work with our maternity hospitals to empower the doctors and midwives to improve the way they practise.’