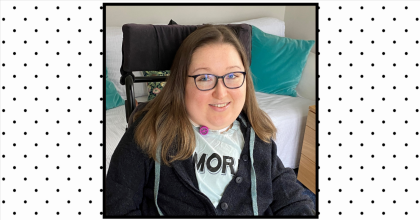 As Stylist’s digital writer, Lauren Geall writes on topics including mental health, wellbeing and work. She’s also a big fan of houseplants and likes to dabble in film and TV from time-to-time.

As restrictions making face masks compulsory in public places are lifted today, Stylist speaks to one clinically extremely vulnerable woman about what the changes mean for her.

Today (27 January) marks the next stage in the lifting of England’s coronavirus restrictions. Last week, the prime minister Boris Johnson announced that people would no longer be asked to work from home, and that masks were no longer compulsory in secondary schools. And from today, a number of changes will come into place, including the removal of face mask rules in public places.

Although the government has said they will still be “recommended” in some settings, and Sadiq Khan has said face masks will remain compulsory on TfL services, this marks a significant shift away from the ‘Plan B’ restrictions which were introduced to deal with the Omicron variant.

For many people, this ‘minor’ change in the rules will be pretty inconsequential. In some ways, it might even feel like good news – a shift that brings us one step closer to the ‘end’ of the pandemic.

But for many of the 3.7 million clinically extremely vulnerable (CEV) people in the UK, the removal of face mask rules – and Boris Johnson’s plan to scrap the requirement to self-isolate on or before 24 March – is a cause for great concern. The threat the virus poses to people in this group remains incredibly high, and many are still at risk of becoming seriously ill or dying as a result of catching the virus.

27-year-old Emma Vogelmann, from Royston, Hertfordshire, is one of these people. She has a condition called spinal muscular dystrophy, a type of muscle-wasting condition which requires her to use an electric wheelchair full-time. She also has a ventilator which she uses via a tracheostomy – an intervention which was required after she fell incredibly ill with swine flu at the age of 15 – which means her strength around breathing and coughing is “very, very limited”.

In short, contracting Covid-19 would be incredibly dangerous for Emma – and the idea of restrictions being lifted at a time when cases remain so high has left her feeling vulnerable and frustrated.

Below, she tells Stylist about her experience as a CEV person during the pandemic, what the lifting of restrictions means for people in her position and how she feels about the idea that we should learn to “live with the virus”.

The removal of restrictions is very scary for someone like me. Particularly before the vaccine, but even now, I fully anticipate that I could very easily die from contracting Covid-19 – it’s incredibly serious, and I’m really concerned about becoming seriously unwell as a result of catching it.

I’ve been shielding since the beginning of the pandemic – in fact, I actually started shielding before CEV people were instructed to, at the very beginning of March. I was working in London at the time and commuting into the city three days a week, and I had to have a conversation with my employer and ask whether I could work from home for my safety for a little while as Covid-19 was becoming more of a thing.

I’ve essentially been shielding since then. I only really leave the house when I absolutely have to, whether that’s to go to an appointment or go to places that I know are very safe. I’ve been to London twice in the past two years, whereas before I was going multiple times a week, and I’ve seen very little of my friends and family. In fact, I didn’t see my brother who lives in Bristol or my best friend for over a year. Recently, with the surge in cases due to Omicron, I’ve had to be particularly careful – almost as careful as I was at the very beginning of the pandemic.

Overall, the whole experience has been really hard on my mental health. At the beginning everyone was really concerned about the virus so you felt that little bit of shared emotion with people, but as time has gone on and I’ve remained fearful while others have been able to get on with their lives, it’s taken its toll, and I definitely feel isolated – I look on Instagram and see people’s stories of them at concerts and doing all of these things that I want to do but can’t, and it makes me wish that I was in their position.

When I hear people say it’s time to “live with the virus” and “treat it like the flu,” I feel insulted and angry. That concept completely ignores the fact that disabled people have sacrificed so much for our own safety and for the safety of the people around us, and that we’re still very scared of contracting this virus. It just feels like we’re being ignored – that our fear and potential hospitalisations and deaths don’t matter.

It was like when restrictions lifted the first time and everyone was calling it ‘Freedom Day’ – that was the ultimate slap in the face for disabled people who were so scared and wanted safety measures to remain in place.

People like myself are just as tired of this as everyone else. I’m tired of being at home all day every day, but if that’s what’s going to protect me from becoming seriously unwell or potentially dying, then I’m going to do it.

I think there’s a real danger of people assuming that because disabled people are still shielding and taking measures to keep ourselves safe, that we want to do it. But it’s not because we want to do it, it’s because we have to – this isn’t a lifestyle that we’re adopting because we’re being ridiculous, we’re doing it to potentially save our lives. It’s as simple as that.

The lifting of restrictions also makes me angry because it doesn’t offer any protection for people like me, who still don’t feel safe (with very good reason), to reintegrate into society. I’m really lucky that I can work full time from home, but with this attitude it’s going to put people in a position where they either have to go into environments they don’t feel safe in, or they’ll have to quit their jobs.

The plan to remove mandatory self-isolation for people who test positive for Covid-19 is even more concerning. As someone who relies on other people for life-dependent care it’s terrifying, because I won’t have any legal precedent to ask them not to come around if they’re ill.

Even now it’s hard – just last night I had a member of my care team get in touch to tell me that they’d had two people in their household test positive and ask whether I still wanted them to come round. Legally, I don’t have any grounds to tell them not to come, even though they’re going to be providing very close contact personal care, but I’m just lucky that she understands the risk the virus poses to me. So, it’s really scary to know that people could be out and about with active Covid-19, because it leaves me with zero ground to protect myself.

In an ideal world, I would like to see mask wearing reintroduced, as I truly do not understand why people have an issue with wearing a mask if they don’t have a medical exemption, especially because it protects other people and themselves. I also think that social distancing should continue to be in place, particularly because of how transmissible Omicron is. At the end of the day, I’m not suggesting we go into a full lockdown like in the early stages of the pandemic. But if there are some little things we can do to keep people safe that won’t harm anyone, why are we not doing them?

I very much hope there will come a point when the virus stops mutating or evolves into something that doesn’t pose a serious risk for people like me, but until then I’m continuing to work from home and asking my caregivers to remain vigilant and safe. I’m also going to continue to shield and go out as little as possible.

If I could ask someone reading this to do anything, it would be to think about the vulnerable people in your lives when you’re saying you’re fed up or want life to go back to normal. I want you to remember that, while that may be an option for you, it’s not for a lot of people, and it’s important to be sensitive to that and not make us feel like we’re being paranoid and overcautious, because medically speaking we’re not.

We’re not being unreasonable – we’re just doing what we need to do to protect ourselves.