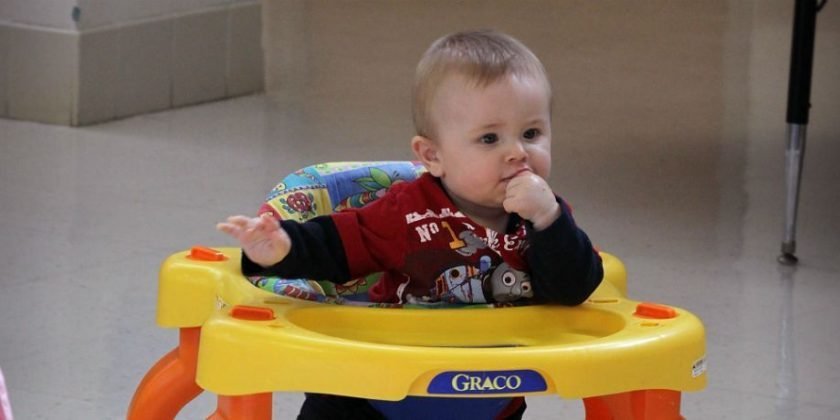 Hospital emergency rooms treat thousands of babies per year because of injuries linked to use of baby walkers.

Using data from the National Electronic Injury Surveillance System, Gary Smith, from the Nationwide Children’s Hospital in Ohio, and colleagues found that there were 230,676 infant-walker injuries treated in emergency departments across the United States between the years 1990 and 2014.

Nearly 91 percent of these children sustained head or neck injuries, and a little over 74 percent were injured falling down the stairs in a baby walker. Of the 4.5 percent who were admitted to the hospital, nearly 38 percent had a skull fracture. The injuries also often occurred in children between the ages seven and 10 months.

The number of accidents linked to these saucer-shape devices has dropped by nearly 23 percent four years after the Consumer Product Safety Commission established a mandatory safety standard on baby walkers in 2010.

Incidents of injuries likely fell as manufacturers adopted the safety standards, but Smith and colleagues think that their findings support the idea that infant walkers need to be banned in the United States as these remain a “preventable source of injury” in young children.

“Despite the decline in injuries, infant walkers remain an important and preventable source of injury among young children, which supports the American Academy of Pediatrics’ call for a ban on their manufacture and sale in the United States,” the researchers wrote in the September issue of the journal Pediatrics.

Smith said that he has treated babies who landed head-first onto concrete after falling down the stairs strapped into a baby walker.

Jerri Rose, from Case Western Reserve University School of Medicine in Cleveland, said that the walkers allow the babies to go to areas that they could not otherwise reach such as the stairways, bathtubs, kitchens, and pools. She said that some of the youngsters have drowned, and others have suffered from painful burns after pulling boiling food off the stove in the kitchen.

Findings of a CPSC investigation in 2010 have identified fatal cases of baby walker injuries. From 2004 to 2008, eight babies died from infant walker-related injuries.

Doctors said that the damage that these infant walkers can do to the body and brain of children is not worth the risk of keeping them on the market.

“There are no advantages to using walkers,” Smith told The New York Times. “They continue to have the potential for serious injury. Parents should be told not to use them.”