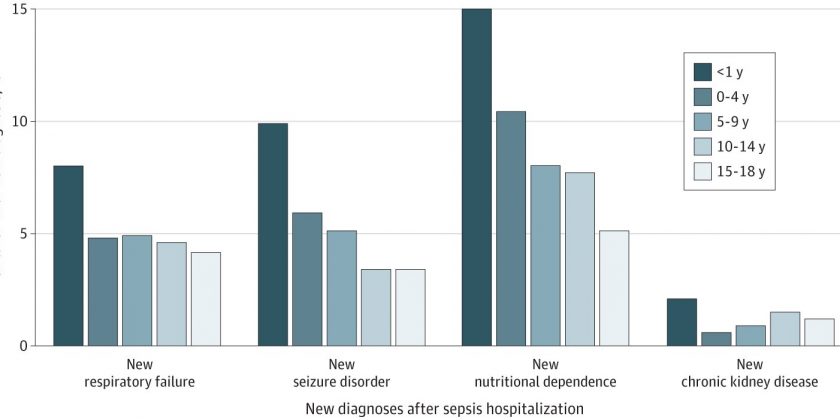 Even months after critical illness for sepsis, children are at risk for new or worsening medical conditions, a study suggests.

One in five children in a national cohort either developed or experienced progressing disease within six months of leaving the intensive care unit for sepsis, according to the research in JAMA Pediatrics.

Researchers compared data from 5,150 children who received ICU care for sepsis to 96,361 who experienced critical illness from other conditions. Those with sepsis were more likely to later experience chronic respiratory failure, problems requiring nutritional dependence and chronic kidney disease. Children in both groups were also at risk of developing a seizure disorder.

Not all children who recover from critical illness from sepsis are impacted equally, the study suggests. Those with pre-existing illnesses were three times more likely to experience new or worsening disease.

Meanwhile, younger children—particularly those under age one—were twice as likely to require supplemental nutrition, such as needing a feeding tube, or develop a new seizure condition such as epilepsy, than older children.

Every year, 70,000 children in the U.S. are hospitalized with sepsis, a life-threatening condition that occurs when a body’s response to infection goes into overdrive, causing damage to vital organs. It is a leading cause of death among children and newborns.