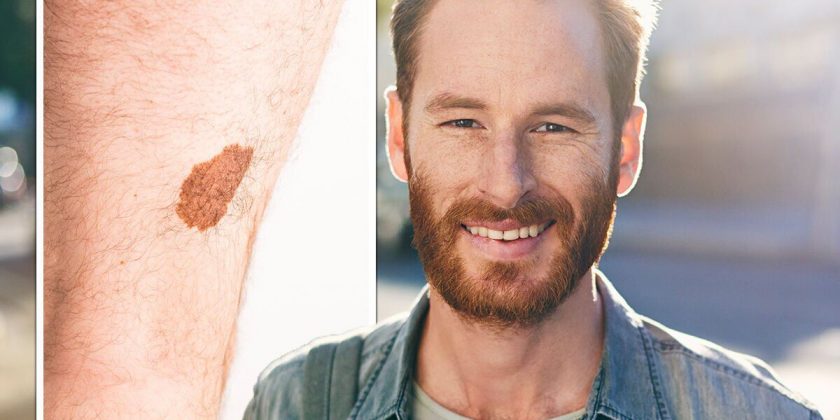 People born with pale colouring, or those with freckles, need to be especially careful to protect their sensitive skin from the strong UVB rays from the sun. Do be on the lookout for five warning signs of melanoma. Take, for example, superficial spreading melanoma – the most common type of melanoma in the UK. The NHS continued: “They initially tend to grow outwards rather than downwards.”

But what do they look like? Experts at DermNet NZ explained: “Superficial spreading melanoma presents as a slowly growing or changing flat patch of discoloured skin.”

It may, at first, resemble a mole, freckle, or lentigo (a pigmented flat or slightly raised lesion with a clearly defined edge that does not fade in the winter).

Over time, the lesion becomes more distinctive – with some people not noticing the mark for decades.

Like other types of melanoma, it can be recognised by the five ABCDE signs:

Superficial spreading melanoma might have an irregular asymmetrical shape, or an irregular border that may be “smudgy in places”.

The lesion could be more than 2mm in diameter; aim to get a suspicious mark checked out before it’s 6mm in size.

Also report to your doctor if your lesion evolves over days, weeks, months, or even years.

If the skin lesion becomes invasive, it might have a smooth surface at first that becomes thicker with an irregular surface.

There could be a thickening part of the lesion, and an increasing number of colours, especially blue or black.

Ulceration could develop, bleeding, itching or stinging – if any any point you are concerned, book an appointment with your doctor.

After an initial observation, you might be referred for a biopsy as a diagnostic measure.

Melanoma skin cancer is the fifth most common cancer in the UK, the NHS reported.

More than one in four skin cancer cases are diagnosed in people under the age of 50.

“Over recent years, skin cancer has become much more common in the UK,” the health body added. “More than 2,300 people die every year in the UK from melanoma.”

If you are referred for a biopsy, you might also have a sentinel node biopsy that checks whether the melanoma has spread to the lymph nodes.

Most melanomas will be treated via surgery, which is usually successful if the lesion is diagnosed and treated in the earliest of stages.

“If melanoma is not diagnosed until an advanced stage, treatment is mainly used to slow the spread of the cancer and reduce symptoms,” the NHS added.

Even with successful treatment, there is a chance skin cancer may return, especially if it’s originally more widespread or advanced when first treated.

Regular health check-ups may be needed to keep an eye on any new marks on the skin.