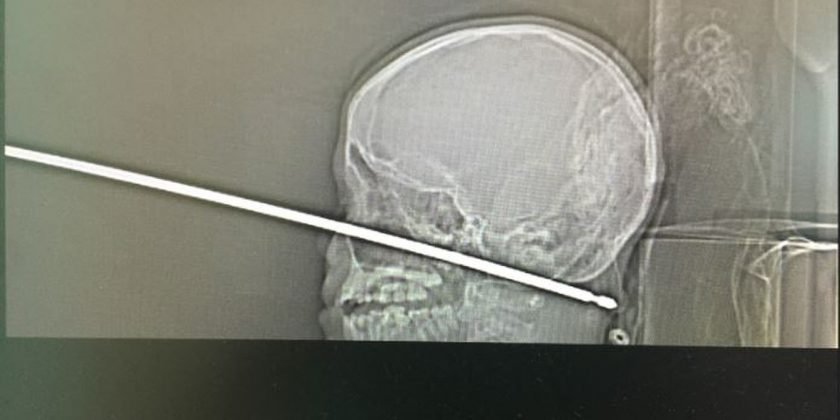 A boy in Missouri who had a meat skewer pierce his face and get stuck in his head miraculously survived the injury, according to news reports.

The boy, 10-year old Xavier Cunningham, was playing in a treehouse when wasps attacked him, causing him to fall off the treehouse ladder and onto a rotisserie skewer that he and his friends had placed in the ground, according to local news outlet KCTV.

The boy was taken to the hospital, where doctors spent hours preparing for a delicate surgery to remove the skewer.

Scans of the boy's head showed that the skewer had pierced his face and passed just underneath the skull, going all the way to the back of the his neck, said Dr. Koji Ebersole, the director of Endovascular Neurology at the University of Kansas Health System, where Xavier was treated. [12 Amazing Images in Medicine]

The skewer just missed hitting critical blood vessels, including the carotid artery and the vertebral artery. "If this was a millimeter closer [to those vessels], it probably would have been an unsurvivable injury," Ebersole said in a video about the case.

The skewer also missed other critical structures, including his brain, brain stem and major nerves. Ebersole called the skewer's trajectory "one in a million."

"How this thing could pass so deep through that part of the body and not hit something critical; I don't know how the kid could be so lucky," Ebersole said.

With careful surgery, doctors were able to remove the skewer. Just one day after the surgery, Xavier was playing Xbox games in his hospital bed, and needed just a band-aid on his face.