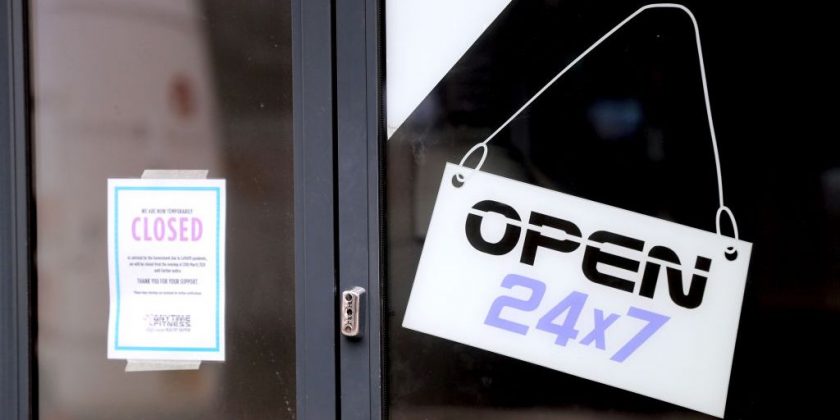 Masks, waivers and temperature checks will become the new reality for many gym-goers as fitness facilities around the country begin to reopen after the coronavirus shutdown.

That could happen sooner than you might expect. Gyms and group fitness studios, after a big lobbying push IHRSA and gym executives, were part of the White House’s Opening Up America Again Phase 1. A spokesperson for the Surgeon General said “gyms can open if they adhere to strict physical distancing and sanitation protocols,” language that echoes previous general guidelines from the White House.

Equinox, SoulCycle, and other gyms will require members to be scanned by a thermal thermometer to ensure they’re not running a fever, one of the many symptoms of COVID-19. Xponential Fitness—the parent company of Pure Barre, YogaSix and Club Pilates—is among the chains that will make members sign new waivers of liability specific to the coronavirus. Gold’s corporate-owned locations (which are managed differently than locations owned by franchisees, notably) and 24 Hour Fitness will close at least once during operating hours to disinfect. OrangeTheory will require members to wear masks to work out.

All the measures are meant to combat the spread of the novel coronavirus, which research has shown can linger in the air for up to three hours in certain conditions and droplets can remain viable on plastic and stainless steel surfaces for up to 72 hours. Gyms in at least 45 states have been shut down as a result of the pandemic, according to International Health, Racquet & Sportsclub Association (IHRSA).

While major national chains surveyed by Men’s Health are readying to reopen, none have set firm dates to do so. 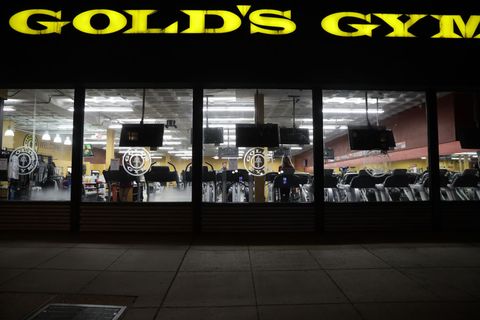 Under Georgia Gov. Brian Kemp’s executive order issued Thursday, gyms are required to comply with a 16 different measures in order to resume operations. Those rules include barring “patrons exhibiting a temperature greater than 100.4 degrees Fahrenheit, cough, shortness of breath, or other respiratory symptoms,” limiting capacity to ensure proper social distancing, and halting both group classes and childcare services.

LA Fitness planned to reopen May 1 in Georgia, but e-mailed members earlier this week to announce the chain put those plans on hold. Life Time and SoulCycle told Men’s Health they don’t have immediate plans to open their Georgia locations.

Zeitsiff said Gold’s doesn’t operate any corporate gyms in the state and—like most franchise fitness locations in the gym business—there’s no way to keep franchisees from opening their doors as long as the independent locations “adhere to their own local and state guidelines.”

“They are good operators and they’ve been working (to make their gyms safer) ahead of time,” Zeitsiff said. “They’ve gone above and beyond. They’re concerned about their team members and their community as well.”

Are Bigger or Smaller Gyms Safer? 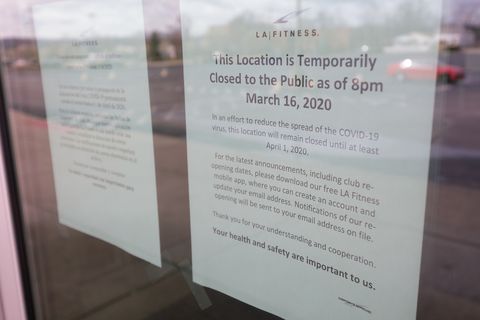 There has been some back and forth between big-box gym chains and smaller fitness studios in regard to what standards should apply to which types of businesses. Generally, all fitness facilities are lumped together as governors, counties, and city officials have shuttered non-essential businesses.

“They have 40,000-square feet to manage and we have a thousand,” said Anthony Geisler, Founder and CEO of Xponential. “They have 40 times amount of the work to do. At the big boxes, most people don’t go in and touch one thing and leave. They will go in and use the treadmill for a little, see somebody interesting and go on the elliptical for a bit. Then maybe they’ll go lift a couple dumbbells because it makes them feel strong. Unless you have somebody walking behind that person, disinfecting everywhere they went, and that person is asymptomatic, that’s very tough.”

Geisler said that his chains had a few instances where members of his chains suspected they had COVID-19 before the shutdown, although they didn’t ultimately test positive. But during the lag between symptoms and getting the test results back, staff contacted those who were in the same classes to warn them.

“We are finalizing the formula for how many people for ‘X’ number of square feet now,” Zeitsiff said. “We are going to keep track of people coming in and out. It could become a little awkward, like when you’re waiting for that table at a restaurant that’s not ready. We operate in a larger box. With cardio and strength (sections), we can control and manage it carefully. These aren’t 1,200-square foot studios where it’s harder (to social distance).”

Dr. Michael “Dee” Gunn, a professor in immunology at Duke University School of Medicine, told Men’s Health there’s no current data that would give the nod to a larger gym vs. a smaller studio when it comes to the likelihood of person-to-person transmission of the coronavirus.

“We don’t exactly know and that’s part of the problem,” Gunn said.

“If someone just coughs, there’s an aerosol that can hang out there for hours”

Gunn added that people can take steps—no matter the size of the workout area—by wiping equipment down before and after each use. That’s a bigger undertaking than it’s billed, and one that some experts are not confident will be feasible even under the most stringent conditions.

“In principle, the cleaning protocols sound good, but, especially at non-chain gyms outside major cities, these are the kinds of regulations that rarely wind up enforced or obeyed,” says Men’s Health fitness director Ebenezer Samuel, C.S.C.S. “Remember the last time cleaning your bench and dumbbells was top of your mind? Gym machines are notorious for rarely getting proper scrub downs in the first place, beyond the occasional gym-goer who wipes down their own equipment, so it’s hard to expect these places to do a complete about-face. It all sounds good on paper. In practice, it remains to be seen how well anyone enforces any of this.”

As far as what gyms can do besides increased cleaning procedures already planned, Gunn said creating fresh airflow within the gym would help.

“The thing I worry about most is being in an enclosed space where the air is stagnant,” Gunn said. “If someone just coughs, there’s an aerosol that can hang out there for hours and you can inadvertently walk into a cloud of coronavirus. I’d feel much more comfortable being outdoors. One thing that maybe should be considered is, can you open these buildings up to a greater extent and bring in exhaust fans to create more air movement?”

How Will Members and Staff React When Gyms Reopen? 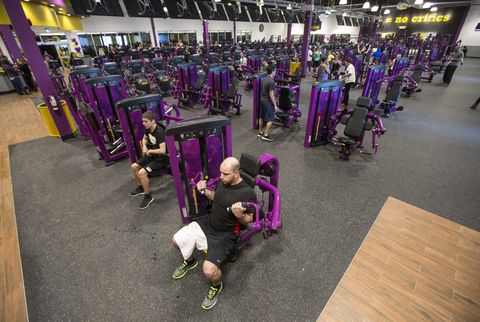 Gold’s tapped MXM, a gym-focused customer experience company, to survey more than 100,000 members on how likely they’d come back in the days following a gym’s reopening. Zeitsiff said 86 percent of those who responded to the online survey said they’d come back.

Life Time surveyed its employees and found “more than 90 percent of our club leaders and 87 percent of front-line team members look forward to coming back to work once locations are reopened,” according to a company spokesperson.

But Geisler said he thinks the industry might face staffing issues.

“There are franchisees that want to open, but their instructors don’t want to teach,” he said.

New York-based fitness trainer and instructor Patrick McGrath said he’s thought about the risk/reward when it comes to returning to work.

“You’re caught in a tough position,” McGrath said. “You want to go back to work because you miss it. As much as you can protect yourself by wearing gloves and masks, you know there’s still a chance you could get sick.” 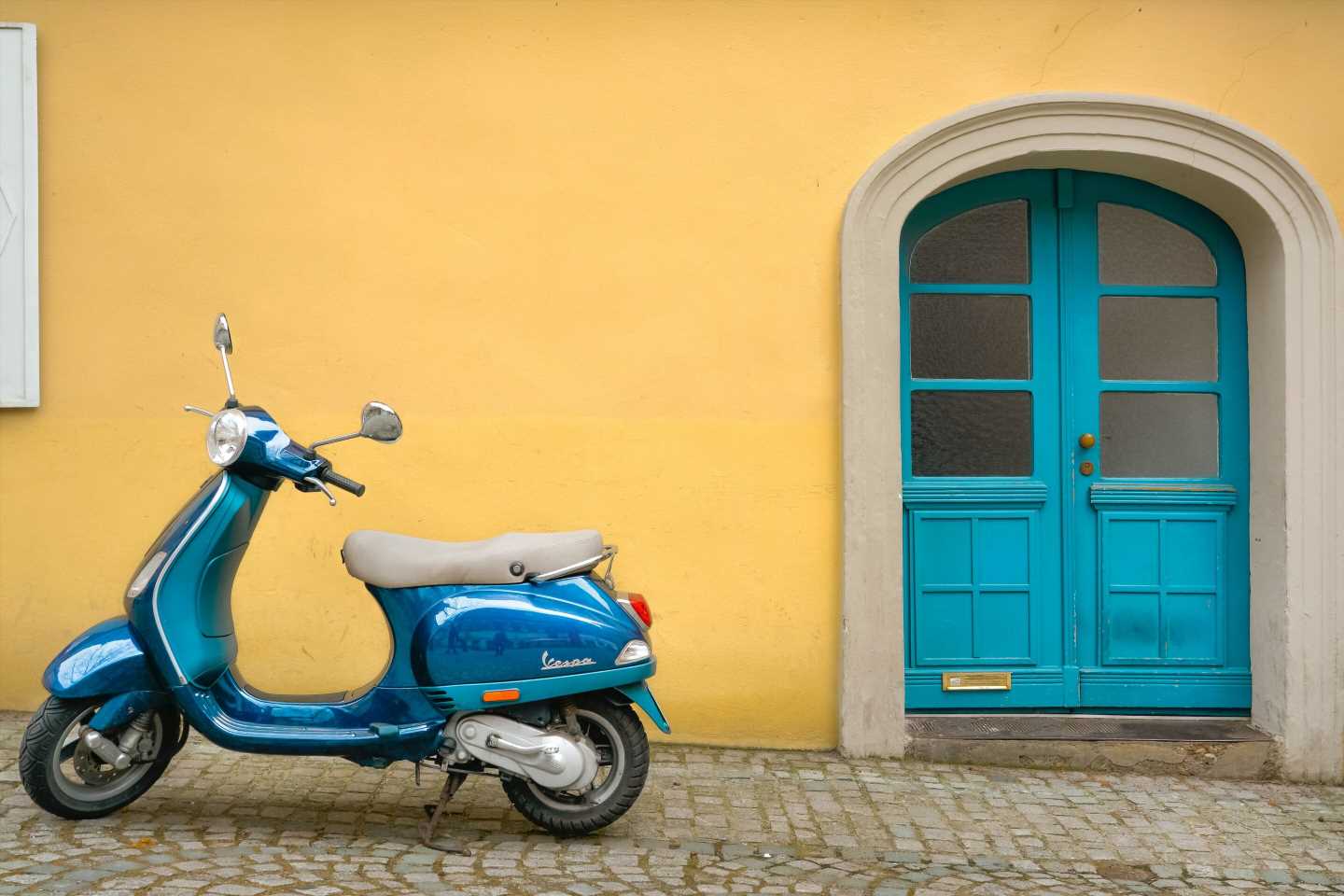