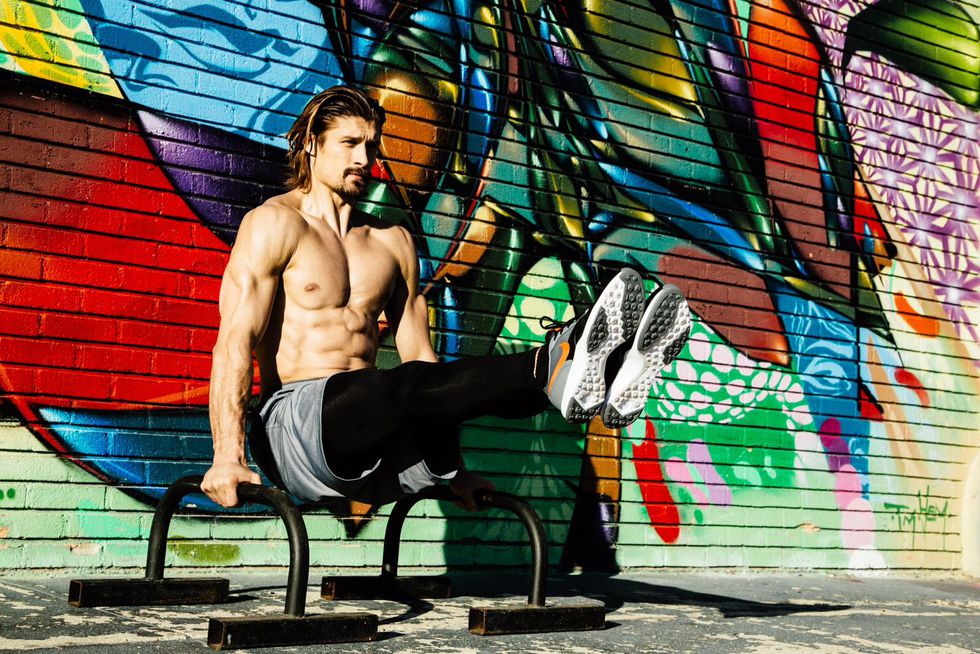 If a celebrity is looking to learn how to use nunchucks, Peter Lee Thomas is the guy they’re calling.

The Los Angeles-based personal trainer and martial artist has carved out a niche for himself in Hollywood as a personal trainer with a fighter’s twist. He’s teaching his clients, who include Halle Berry, Sean “Diddy” Combs, and Demi Lovato, ways to incorporate different types of martial arts into their workouts and helping them get bodies that look like they could dish out some serious damage.

Even more uniquely, his workouts are often performed without ever stepping foot in a gym or lifting a single weight.

“There’s a huge misconception that you can’t have an awesome physique without using some type of weight,” said Thomas. “But when you look at people like fighters, gymnasts, Navy SEALs, guys in calisthenics parks… they’re primarily only using their bodyweight for their workouts, and they’re just physical specimens, built like Greek gods. You realize that theory just goes out the window.”

Don’t get the wrong idea, here: Thomas is far from anti-weight. But he believes weights are a great compliment to a training program, not the entire structure.

Since his training philosophies are rooted in martial arts, he depends on those principles to yield impressive results, both for him personally and for his clients.

Thomas’ martial arts background reaches back to his childhood, as does his instinct to coach. He grew up practicing, and as he got older, he loved the opportunity to teach younger people the skills he was working to master.

“When you teach something, you learn it twice,” he said. “When I was 20, I decided that teaching martial arts and learning more about martial arts was something I wanted to continue to do.”

So he did. Thomas now has a full instructor ranking in Muay Thai (aka Thai Boxing), has a Silver Glove in Boxe Francaise Savate, and won the 2006 National Kickboxing Championships.

As he became more skilled and recognized for his martial arts prowess, he started getting phone calls from celebrities who wanted help to learn a fighting skill for an upcoming movie, or just to get in shape.

“I never force (martial arts) on my clients, but a lot of times they show a little interest in it,” he said, “There are definitely some that don’t have any interest, and that’s fine. But most of the time, if they try it once, they realise how incredible of a workout it is, because of the different muscles they have to recruit. Then they get hooked.”

Motivational Monday ???? It motivates and humbles me to think back in which where I come from and what I've endured. I am thankful and honored to be part of such a special linage. Thank you to my teacher and role model Guru Dan Inosanto (Bruce Lee's close friend and disciple). You are forever an inspiration to me. Special thanks to ? @janetlanger #brucelee #jkd #jeetkunedo #mma #actor #fitnessjourney #kickboxing #ufc #muaythai #bjj #boxing #vikings #nike #fitnessmodel #starwars #talent #casting #igfitness #instafitness #workout #training #fitness #instafit #model #sdcc #gameofthrones #yoga #got7 #fitnessaddict #fitnessmotivation @marvel @dccomics @wbpictures @warnerbrostv @universalpictures @paramountpics @foxtv @netflix @history @nbctv @starwars @historyvikings @gameofthrones @legendary @menshealthmag @lionsgate @lionsgatetv @spiderandersonsilva

He explained that he has clients who complain about not seeing any sort of transformation despite dedicating hours to cardio machines or running.

“Once they start incorporating some martial arts training, they really start seeing a transformation,” he said. “It’s cardio, but a different type of cardio. It’s aerobic and anaerobic at the same time.”

Granted, if Thomas has access to a gym, he’s certainly incorporating things like dumbbells, kettlebells, sandbags and battle ropes into his client’s workouts. But he doesn’t believe getting into incredible shape is a matter of having equipment on hand.

That’s why Thomas’ workouts all stem from fight training. Still, he believes that any well-rounded program throws in a little bit of everything—weights, calisthenics, cardio, martial arts.

“Some of the hardest workouts I’ve ever done have been with little to no equipment,” he said. “If you have a bunch of cool stuff, obviously take advantage of that. But if you don’t have the luxury of a gym, or even time, there are things you can do. It’s all about resourcefulness.

That’s especially true if you want incorporate some basic fighting techniques into your work own—so Thomas created this minimalist bodyweight workout. All you need is enough room to do a burpee, and you’re good to go.

For this workout, you need to know how to throw a jab and a cross, which are basic boxing moves.

Start out by standing in a fighters stance (left foot forward, right back as a righty, opposite for lefties) and throw two quick and powerful punches with your lead and back hands, respectively—the jab and cross. Then, do two burpees. Next, add on two more punches, for four total, then four burpees.

Continue this pattern until you’re at 10 punches and 10 burpees. Then, start subtracting two reps from each exercise, until you’re back down to two each.

“For a really good workout, I’ll do three to five rounds, all the way up and down the ladder,” Thomas said. “But just doing one round, you’re getting 60 reps per exercise, that’s a pretty tough finisher or great warm-up for a lifting session.”

If you have a gym handy and some boxing experience under your belt already, throw on some wraps and hit a heavy punching bag for your punches, and do sprawls instead of burpees.

This article originally appeared in Men’s Health US