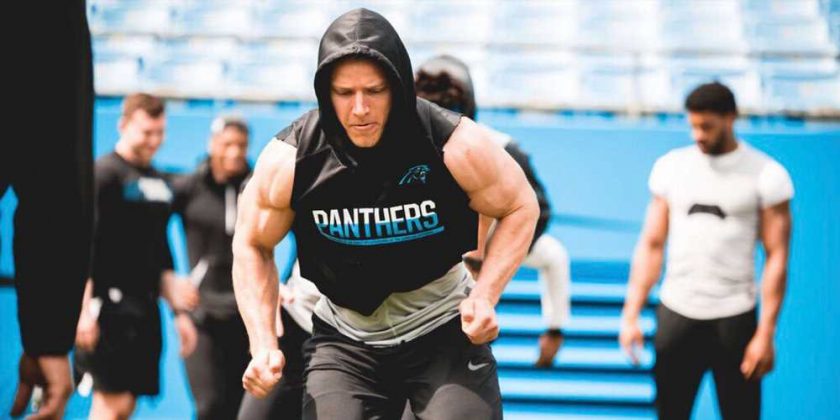 After putting up nearly 2,000 all-purpose yards last season, Carolina Panthers running back Christian McCaffrey wasn’t going to sneak up on anyone this year. Not willing to settle for just being one of the best players in the NFL, though, McCaffrey showed up to Panthers camp this past spring looking, well, different. As good as he was a season ago, the dual-threat back hit the offseason program back in April looking absolutely ripped. And the internet noticed—photos of his new, improved arms went viral.

“I’m way stronger than I was last year,” McCaffrey told ESPN in an interview back in May. “The faster I can get, the better as well. You can always get bigger, faster, stronger.”

2️⃣2️⃣ coming for it all 😤 pic.twitter.com/WQRIttO1qQ

That ESPN piece stated that McCaffrey’s offseason training program closely resembled one for an elite track athlete. He also focused on increasing bulk and decreasing body fat. His trainer, Brian Kula, said that in essence the two run an “underground operation,” since they don’t go to a fancy training facility—they just work together where and when they can.

“People think his biceps are growing too big,” Panthers QB Newton said jokingly in the ESPN story. “He’s an unbelievable athlete on the field. Swagger through the roof. Just a guy who comes to work … an All-America.”

At 5’11” and 205 pounds, McCaffrey’s frame isn’t particularly big or small for his position. In fact, by the numbers, that’s a pretty typical size for an NFL running back. But even two games into the season, the star third-year player’s work is paying off. Despite erratic play thus far from the rest of the Panthers (particularly star QB Newton, who is dealing with injuries), McCaffrey is still averaging nearly 5 yards per carry, along with 12 catches, through two games. The Panthers have started out 0-2, and are looking at a pivotal early-season game against the Cardinals in Week 3.

As the photos show—and anyone who’s watched the games would be able to tell you—McCaffrey is far from responsible for the slow start. He’s been a standout player, and looks to be in just as amazing shape for the season as he was in the offseason.

McCaffrey walked ESPN through his typical training day during the offseason. He was working out five days a week, with three days of intensive training, one football-specific movement day, and one recovery day. If that sounds tiring, well, it probably is. But McCaffrey says he’s ready for whatever it takes.

“Somebody has eyes on me all the time,” he said. “My training is very specific to my sport, so it’s a lot of fast, explosive movements. It’s very pertinent to exactly what I do on the football field, which is fast burst in short spaces. Every once in a while, I’ll get in the top end.”

In another interview with GQ, McCaffrey talked about the diet that helps keep him in top shape. He says early on in his career, he ran blood work and worked with a chef, which helped to realize the things his body was deficient in. This meant cutting out chicken, tuna, wheat, and soy, and focusing only on stuff that will build towards his improvement. “Now, everything that I eat is pertinent to what I need for my best performance,” McCaffrey said.

To attempt to get your own arms to look even anything like McCaffrey’s, you could follow some advice from Men’s Health fitness director Ebenezer Samuel, C.S.C.S. Samuel suggests using moves like this dumbell curl series that perfects the ‘forearms parallel to ground’ position, which allows you to make the most of your curls.

Check out Samuel’s tips below:

You could also try a triceps finisher with your workout to build up something other than your biceps—because if you really want All-Pro arms like McCaffrey, you can’t ignore the tris.

The tips Samuel offers are as follows: