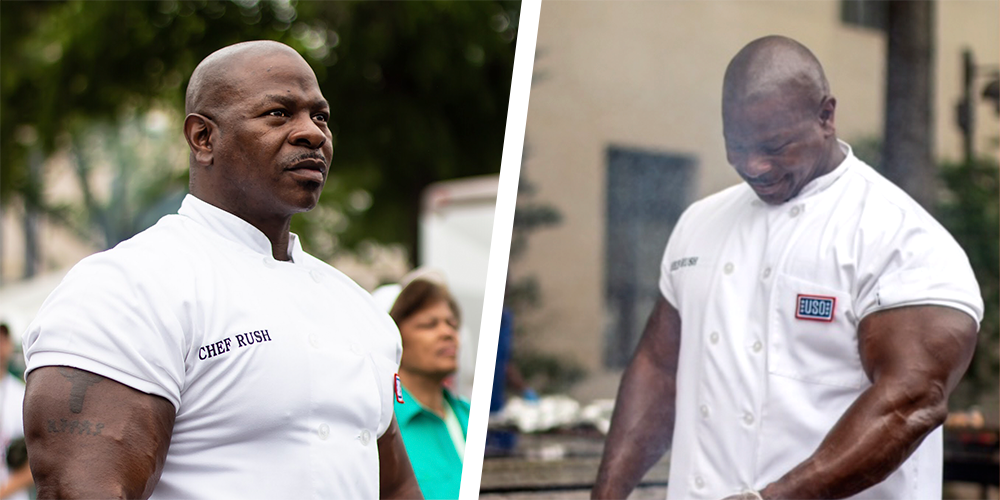 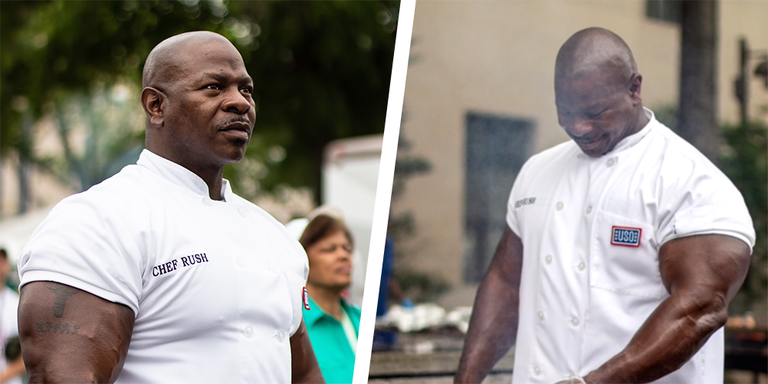 Last month, a political reporter posted a photo of White House chefs preparing for President Donald Trump’s iftar, the meal served at the end of Ramadan. But it wasn’t the tray of grilled veggies that caught Twitter’s attention. It was Chef Andre Rush and his 24-inch biceps.

“The other day my friend was like, ‘You’re famous!'” Rush tells MensHealth.com. “I’m getting, like, hundreds of emails and texts and calls. But I don’t think people understand what it is I actually do in the gym to look like I do.”

The secret to his physique, he says, is a dedicated workout schedule that includes a staggering amount of push-ups and bicep curls. Plus, a regimented diet that’s heavy on muscle-building protein.

Rush does 2,222 push ups every weekday as a part of the #22PushupChallenge to raise awareness of the estimated 22 military veterans who die from suicide every day. He does up to 200 push-ups at a time, with a three to 10 minute break in between each set. Of course, that’s on top of his normal workout routine. He hits the gym almost every day for an hour or two and abides by a “72 hour” rule, meaning he works out a certain body part every three days.

Not surprisingly, his favorite day is arm day.

Though 45-year-old Rush is enjoying sudden viral fame — including appearances on TMZ Live and Good Morning America — his brawn and his equally impressive culinary career have been a long time in the making. Rush joined the Army at 21, cooking for top military brass, before landing in the White House kitchen, where he’s prepared meals for the Clintons, the Bushes, the Obamas, and now the Trumps.

“You just have to be motivated to get to the gym. There’s no excuse!”

Rush, who grew up in Columbus, Mississippi, was never the biggest kid on his high school football team — but he could outperform almost any teammate in the weight room. When he weighed 150 pounds as a teenager, he says he was benching around 315 pounds. Friends started calling him “horse,” because he was “strong and fast, just like a Clydesdale,” he recalls. “I never got into fights, but I’d have grown men try to [take me on], because I was unusually strong.”

Once, he says, a wrestling coach at his high school brought in a professional wrestler to teach the team some moves. “This guy tried to move me — this is a grown-ass man and I’m just a kid — and he literally couldn’t,” Rush recalls. “He told me, ‘You’re an unstoppable force.’”

After high school, Rush joined the military. “My career was to kind of be, like, a security person for VIPs, like generals,” he says. “I became a cook in 1994.”

He was a 92G (a culinary specialist) — mastering everything from pastry and chocolate sculpting to ice carving — and cooked for senior staff at the Pentagon and then eventually in the White House kitchen.

“The camaraderie among the chefs reminded me of hanging out with my friends back in Mississippi, and I got tired of being serious and being out in the field 24/7,” he says. “Plus, I just love to eat!”

North Korea: “we have nuclear weapons”

And eat, he does. On a typical day, he starts his morning off with 12 to 24 hard-boiled eggs (two are whole eggs, the rest are egg whites), a peanut butter shake (with protein powder, blended quinoa, and nonfat milk), greek yogurt, oatmeal, and lean turkey. He brings turkey in Ziploc bags to snack on in the gym. In the afternoon, he devours four whole roasted chickens.

His high-profile clients have taken notice of his impressive build and aren’t shy about asking him for fitness tips. “One time, while at West Point, President Bush complimented me on my fitness and asked how often I work out and what I do [to get so strong],” says Rush. “Of course, President Obama, he also mentioned my fitness, and I do get a lot of people in higher power asking, like, what I do to maintain my physique at my age.

“I tell them, you just have to be motivated to get to the gym. There’s no excuse!”

Every POTUS has different food preferences, and “some have healthier profiles than others,” Rush says.

Rush retired from the Army about 18 months ago, and now works as a freelance chef and consultant for major events at the White House, leaving him time to focus on fitness and cooking for his family. He’s a father to four children, ages 26, 25, 12, and 11.

“My kids are fit as well, and they love what I’m doing and how I’m doing it,” says Rush. “I try to lead by example, I let them know about healthy cooking and healthy lifestyles. I’m passionate about what I believe in.”

Chef Rush shared the workout routine he follows to maintain those monumental arms. There’s a ton of volume here, so be wary — this isn’t a workout for just anyone. Unless you’re trying to build the two-foot wide biceps you see on our nation’s largest chef, stay out of this kitchen.

A three step movement done with dumbbells while standing with your feet shoulder-width apart.

One arm cable curls done as a drop set, starting at 72 pounds.