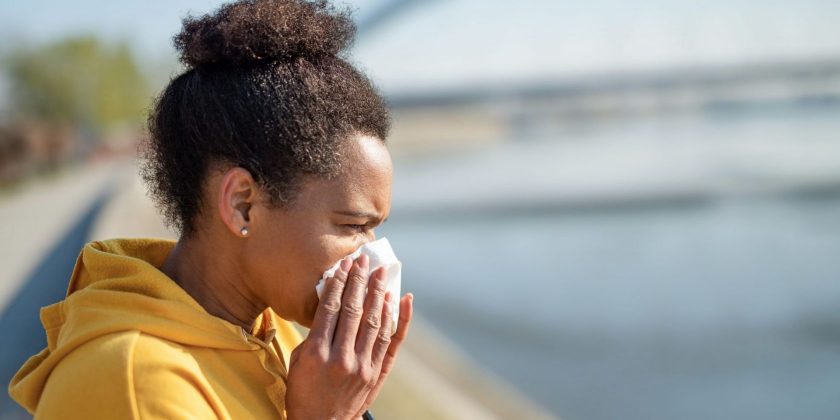 A sizzling summer has been forecast which means (eek!) a bumper hay fever season. Recent data has also revealed that most of us live with high levels of pollen-boosting air pollution. So, how can we keep running through all of this bad air?

There’s real freedom to be enjoyed when running outside. Whether your route includes a park, woodland, canal towpath or suburban street, the distance feels limitless and the air feels fresh until… nature turns and hay fever season hits.

If you’re one of the millions of hay fever sufferers in the UK, the great outdoors can suddenly feel like an assault course; watery eyes obscure your vision, a sneezing fit upsets your pace, and the sight of seeded grass makes you too nervous to breathe deeply.

Can’t sleep because of cough, cold or hay fever symptoms? Here’s how to get a decent night’s shut-eye

A 2021 survey by the charity Allergy UK and Kleenex, revealed that nearly half (49%) of the UK population now lives with hay fever – double previous estimates – and it’s affecting our lifestyle. Almost half (49%) of sufferers said they spend less time exercising outside because of symptoms, and 64% reported tiredness due to poor sleep quality.

This year, we’re entering hay fever season with the news that air pollution is now above WHO levels for almost all of us in the UK, with London and Leeds among some of the worst areas for air quality. The latest data reveals that 97% of addresses exceed WHO guidelines for at least one of three key pollutants, while 70% of addresses breach WHO limits for all three.

This is bad news for hay fever sufferers because air pollution acts like a blanket trapping pollen at ground level, leaving it to swirl around at a higher density exactly where we run. Research by the University of Birmingham also found that pollutants from car exhausts alter the protein on pollen that causes allergic reactions, supercharging its ability to reduce us to itchy, snivelling messes.

But we don’t want to banish ourselves to an indoor treadmill until October, or even stop running altogether for months on end. So how can we keep running in the face of the twin terrors of air pollution and hay fever?

Hay fever symptoms – essentially the inflammation of the inside of the nose, the sinuses, eyes and throat that causes sneezing, itchiness and breathlessness – are exacerbated when you exercise outdoors where you are exposed to a whole range of pollen originating from trees in spring, grass in summer and weeds in late autumn.

A 2014 study of professional and recreational athletes found that sports performance was drastically reduced during pollen season. Dr Subashini M, director of science, health and wellness at Holland & Barrett, tells Stylist: “This is unsurprising as the allergic response can cause nasal and conjunctival congestion, tearing, breathing difficulties, pruritus (itching), fatigue and mood changes, which all affect athletic performance. Imagine the extra load that the body has to endure due to the immune system being in overdrive while also trying to meet your fitness goals.”

Running on the canal might be your best bet, as there tends to be less pollution and lower levels of air pollution.

Dr Giuesppe Aragona, GP and online doctor for Prescription Doctor, agrees that hay fever can severely compromise running performance. “Studies have found that hay fever symptoms can weaken your nasal flow by around 75-80%.

“It’s imperative that our nasal passage is clear, as during any kind of high impact exercise it’s essential that we get enough oxygen into our body. Hay fever symptoms may also affect your concentration and energy levels, as you’re more fatigued and tired due to your compromised immune system.”

Minimise your exposure to air pollution

It may not constitute your whole run but a busy road probably features on your route at some point. Just reading the words “photochemical smog” (a beautiful term used to describe the mix of pollutants in urban areas) probably makes you subconsciously hold your breath, so hands up who feels a little paranoid about taking deep breaths during a roadside run?

“Air pollution can exacerbate symptoms of hay fever,” explains Subashini. “When you run or engage in any aerobic activity, you inhale more deeply, usually though your mouth, so the air bypasses the nasal passages that usually filter airborne pollution particles. The health effects of air pollution are serious [but] while this might seem scary, exercise has clear health benefits. I would recommend timing your runs to coincide with a lower pollen count and when the roads are less busy, rather than hanging up your running shoes for the season.”

Aragona adds: “Hay fever symptoms are often worse in an area of high air pollution, so your best bet is to try and avoid central areas of towns and cities. You should avoid parks where the pollen count is likely to be higher, and run alongside a river or canal where there’s lower air pollution and less pollen.

“You may also want to wear sunglasses to avoid pollen particles making their way into your eyes, and dab a bit of Vaseline on each nostril to help trap particles, stopping them from travelling up your nasal passage.”

If you run in London, you can check the best and worst routes for air pollution by using the Tenzing Clean Air Tracker. This tool uses real-time data from Kings College and once synced with Strava will give you an air quality score for any run, cycle or walking route you record. Similarly, you can search for ‘clean’ runs in each London borough and share your routes with the community.

Check the daily pollen count – The University of Worcester produces the pollen report for the Met Office and its pollen forecast webpage includes more detail on levels of specific allergens plus regional calendars for pollen types.

Avoid the worst – Know your allergens (is it tree, grass or weed pollen?) and plan routes to avoid areas where they are at their densest, and where there is little traffic. Pollen counts tend to be at their highest between 5am and 10am, but this differs depending on the weather and specific types of pollen grain.

Wear protective accessories – Wraparound sunglasses will protect the eyes, and dabs of Vaseline or similar products such as HayMax on the nostrils will help stop pollen entering your system.

Wash kit and hair after every run – Pollen sticks to clothing and hair so this is an extra incentive to put everything, and yourself, straight in the wash afterwards. Dry clothing indoors to avoid collecting pollen particles on a washing line.

Run indoors on the worst days – If the only time you can run coincides with a particularly bad pollen forecast, you can always retreat to your local indoor gym and hit the treadmill. Don’t let those pesky pollen grains get in the way of your fitness goals.