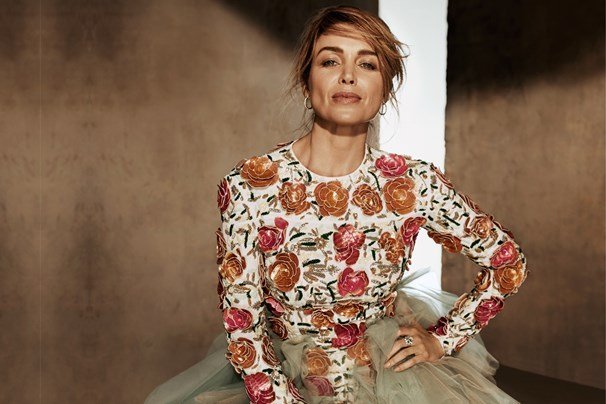 Across the gym floor, under the mirror ball she had installed (because “who wants to do a workout called ‘TheBear’? I want ‘The Disco’”), she is smashing a tough boxing combination with her trainer Steve “Scuba Steve” Vaughan—and I’m barely keeping up. Shakespeare’s famous line “Though she be but little, she is fierce” could’ve been written about Minogue. Having just turned 46, the star and mother to seven-year-old Ethan is in perhaps the best shape of her life. She has an “addictive” new training regimen that’s transformed her body and provided more mental clarity, a recently launched single via her own record company and an upcoming national tour with British pop royalty Take That. Collapsing onto the sofa after our workout, Minogue pours us green tea and shares her muesli bar with me as we settle in for a chat (and I try to recover from having my butt kicked by one of Australia’s best-loved performers).

You’re about to go on tour again. Nervous?

Dannii Minogue: So nervous! It means you care, you want it to be good. We’ve got six shows so we’ll get into a run. I’ve got a band so [I’ll] have characters to have fun with—and then there’s the Take That boys.

Such a great pairing. How did it happen?

We were always releasing songs at the same time in the early ’90s [and] were on the same circuit. I just worked with Gary [Barlow] in England doing [BBC One TV series] Let It Shine, and Howard [Donald] and Mark [Owen] were there helping make the show. They were [planning] their world tour and talking about it when we were filming. And I get to tag along for the ride. I think there’s a whole passion for artists that were around in the ’80s and ’90s getting back on the road. I don’t know what the new music stars think—like, “What are these oldies doing out there?”

Read about my gym session with Emily at @the_hub_mfj in this month's issue of @instylemag. She omits the detail of not being able to walk for a day or two after our workout, and I’m still trying to get her to join me there again. The more sessions you do, the less it hurts #ComeBack ?????

Is there less pressure this time around?

It’s the same pressure, but it’s less of a blur. I don’t do as many gigs any more—at one point I was doing them all the time. Somebody will show me a picture and say, “I met you when you did this show in Scotland,” and I don’t even remember being there. When I first went to Europe I didn’t know what all the shows were [or] what I was going on. I’d done Top of the Pops three times before someone said, “You know, that’s some people’s mission in life—to appear on Top of the Pops.” A lot of it passes in a blur, [especially] with the travel around Europe, bouncing from one country to the next. I remember entering a country at immigration and [the customs officer] asked, “What country have you just come from?” and I said “I don’t know—this is my third country today. I can’t remember where I’ve just come from.”

You’re just getting pushed around: “Go here, say this, do that.” Now I have my life, I’m looking after Ethan and then I’m going to do these special shows, so all the focus is on that. It’s nice and relaxed.

How are you preparing?

Back in the day, I didn’t have to get fit and ready for a show because I was a machine—I was performing all the time. Now, because I don’t do that all the time, this [training] has been the thing for me. I was sick of hearing myself say, “I’m going to start working out.” I was sick of thinking it, hearing it. I just couldn’t believe I wasn’t really doing anything. I got more active when Ethan started school because we walk…but it’s not really fitness. So [now] Ethan comes [to training] with me on the weekend…and sometimes he’ll just look at me and say, “Go mummy!” and I have the biggest smile and [it’s] the best feeling ever.

Two seconds after this photo I was screaming "help get me down". Clearly the Monkey Bars are not my strong point, but I will never improve without trying…and trying again. Thanks to @scubastevemfj who inspires this "Hub" crew to do things we never thought possible. #NeverGiveUp @shaynnablaze If you look closely you can see me still doing a Minogue Brow Lift on one side – I use it for 'shock' 'disgust' and 'impressed'?

What else have you noticed about prioritising fitness?

Confidence. Pushing through that boundary of thinking, “I can’t do it,” and then you do, and you’re proud of yourself. Then when you come back to do it again it’s a little bit easier…It’s like a meditation. It [leaves] your headspace so much clearer about everything. [I’m] in a completely different place—it’s a world of difference.

Has your diet changed, too?

I used to hear people say, “In your mid- 40s you get this tyre around [your waist] and you just can’t budge it.” I definitely noticed in the past year or so that I [was] eating the same amount of food but it just suddenly [felt] really thick around [my stomach]. I love food too much and I just want to be able to eat and eat and eat, so I would rather train really hard and try to build up some muscle. I haven’t changed that much on the scales but my muscle volume compared to fat has changed dramatically

This is an exclusive extract from our cover story. For more from Dannii Minogue, pick up the November issue of InStyle Australia, available now.

This article originally appeared on InStyle