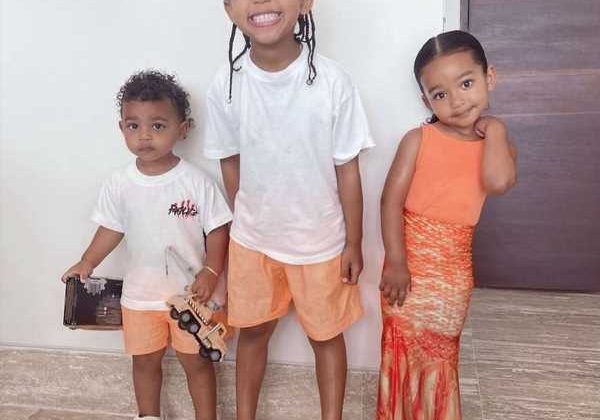 Kim Kardashian's youngest kids had a photo shoot without their big sister North!

The Keeping Up with the Kardashians alum, 40, shared pictures of Chicago, 3, and sons Saint, 5, and Psalm, 22 months, as they posed in matching outfits.

In all of the photos, Psalm kept a straight face as he held toy cars, Saint gave a beaming smile and Chicago struck modeling poses.

"3 out of 4," Kardashian captioned the photos.

RELATED: Kris Jenner Breaks Silence About Kim Kardashian and Kanye West's Divorce: 'I Want the Kids to Be Happy'

The mom of four's friend Malika Haqq gushed, "I mean… 😍😍😍," in the comments section.

Two weeks ago, Kardashian shared sweet photos of Chicago in a princess dress and Psalm in a casual outfit during a beach outing.

The KKW Beauty founder gushed about motherhood writing, "You are my dream come true. I'm so happy to be your mommy."

Kardashian shares her four children with West, 43, whom she filed for divorce from in February.

That same month a source told PEOPLE the pair "have a different vision of the world and how their kids should be raised."

They added, "Kim will always support Kanye and his causes and encourage him with their kids, but her future with work, family and life in general are strictly up to her. She makes it happen."

Despite their different parenting style, Kardashian and West have put their best foot forward to co-parent.

"Kanye has been spending time with all the kids," a source previously told PEOPLE. "A nanny is around during the visits. Kim has not been around for the visits, at Kanye's request."

The insider added, "Kim has made it clear that Kanye can talk to his children anytime he wants. She has never threatened to keep him from the kids. She only requires that he is not going to damage them. She knows he loves them, and they love him. Kanye can FaceTime the kids anytime he wants."