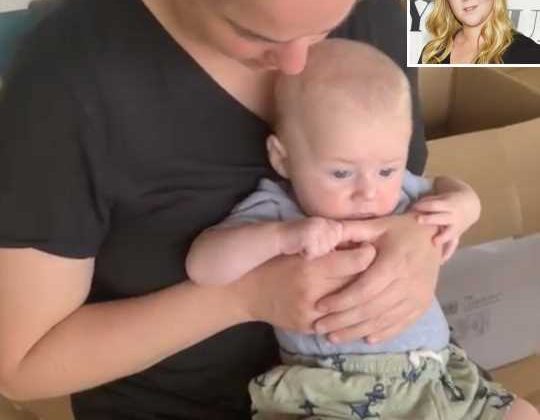 The Growing comedian, 38, posted a silly video of her 3-month-old son — whom she shares with husband Chris Fischer — to Instagram Friday, giving a glimpse into Gene’s most recent fascination.

The clip shows Schumer’s sister, Kim Caramele, cradling her nephew as he decides to nibble on her thumb.

“Gene treats Kim’s hand like 🌽,” the Trainwreck star captioned the video, joking that her son treated his aunt’s thumb as if it was corn on the cob.

In addition to hanging out with his auntie, Gene has had an exciting summer filled with beach days and snuggles from his mom and dad.

Last week, Schumer shared adorable photos of her sun-soaked day at the beach with Gene.

In both shots — one on Schumer’s main feed and another on her Story — the mother-son duo looked inseparable while relaxing on the shore.

The baby boy locked eyes with the camera in each photo, smiling as he rested on his mother’s chest in one picture and laying on his back in Schumer’s lap in the other.

Gene’s parents appropriately styled their son for the beach getaway, dressing him in a white, short-sleeve, sailboat-printed onesie and a matching blue boat hat.

Schumer and Fisher welcomed their son in early May. Since then, the actress has been open about the highs and lows of being a new mom and clapped back at those critics who had something to say about her post-baby attire.

Five weeks after giving birth to Gene, the mom shared two photographs of herself that showcased the star spending time with her newborn on two separate occasions while wearing her stretchy, white “hospital underwear.”

She later addressed critics on Instagram by sharing another pair of snapshots that showed her walking outdoors wearing all black — the second in which she had her shirt pulled up, showing off her cesarean-section scar as she stuck out her tongue and flashed a peace sign to the camera.

“I’m really sorry if I offended anyone with my hospital underwear. Except I’m just kidding. #csection #balmain,” Schumer captioned the post.

Atop the same images on her Instagram Story, the I Feel Pretty star wrote, “I want to apologize to anyone I offended with my hospital underwear post … Major apologies from me and my C!”