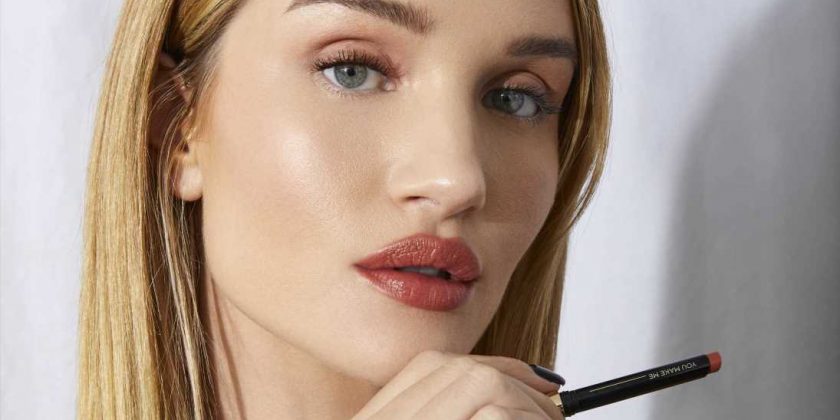 Rosie Huntington-Whiteley is deepening her beauty ties.
The model, who was previously the face of BareMinerals, has been named a brand ambassador for Hourglass, marking the first partnership of this kind for the cruelty-free cosmetics company, which is on track to be vegan by the end of the year. Huntington-Whiteley worked with Hourglass last year on branded content for her two-year-old web site, Rose Inc. That content, said Hourglass chief executive officer and founder Carisa Janes, was a hit for Hourglass, encouraging Janes to solidify a longer-term deal with Huntington-Whiteley.
"She loves beauty and is such an enthusiast, it comes across in the way she speaks about beauty and talks about product," Janes said. "We were both interested in seeing what a more significant partnership would look like and we decided to give it a shot."
In addition to appearing in Hourglass campaigns, Huntington-Whiteley collaborated on a shade of the brand's Confession Ultra Slim High Intensity Refillable Lipstick. Called "You Make Me," the shade is a terra cotta nude and retails for $36.
"I feel at this point my life that partnership has to be a meaningful one, has to have integrity," Huntington-Whiteley told WWD. "For me to be able to talk about the brand or promote it, it has to be authentic and in this case, it absolutely is."
Hourglass recently launched its Vanish Airbrush Concealer, which industry sources estimate could bring in as much as $25 million at retail globally — Hourglass' largest launch to date. The company is said to have done $250 million in retail sales last year. It is said to have experienced 30 percent year-over-year growth for the past five consecutive years, including 2019, with 50 percent of revenue generated outside of North America. The business is said to be on track to grow by 30 percent in 2020.
Late last year, Huntington-Whiteley said she will produce and host a show that will soon debut on short-form streaming platform Quibi. Content will focus on the beauty industry, featuring the journeys and businesses of various individuals who inspire Huntington-Whiteley.
"I wanted to pitch this idea to Quibi because I felt that it was going to be the right platform to take the content that I’ve been producing with Rose Inc. to another level," she said.
The model launched her web site, Rose Inc., in May 2018. Featuring both editorial content and an e-commerce platform, the site is run by her and a team of six women.
More from WWD.com:
RMS Beauty Names New Chief Executive and Operating Officers
Bite Beauty Goes Vegan, Launches Complexion Range
Clean Makeup Brand Ilia Raises Series B, Plots Further Growth
Source: Read Full Article