The dangers of your picnic basket: Olives sold at Aldi contain four times more salt than a hamburger AND fries at McDonalds, warn campaigners (so how salty is YOUR favourite snack?)

Campaigners have warned of dangerously high levels of salt in your picnic basket, including in your olives and Cornish pasties.

Action on Salt found half of products were higher in salt than targets set for them by Public Health England.

Many are also high in saturated fat. For instance, a cheese and onion slice from Morrisons contained more of it than five McDonald’s hamburgers.

The campaign group are now calling for compulsory traffic light labelling on the front of packets on all picnic favourites. 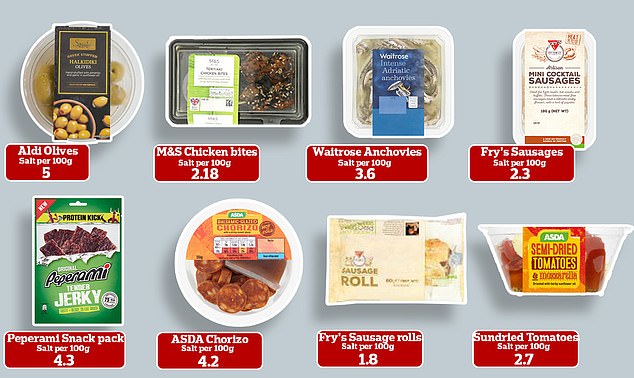 An analysis of 555 snacks named Aldi’s Specially Selected Hand Stuffed Halkidiki Olives as the worst offender. The 150g snack contains 5g of salt per 100g – the equivalent of 1.9g for every five olives, or 7.5g in total. In contrast, there is 1.8g in a McDonald’s hamburger and fries

Almost one in three products have no colour-coded front of pack labelling.

Nutrition tables on the back of packets are mandatory under EU legislation, however colour coded nutrition labelling on front of pack is optional.

Research has shown that colour coded labelling on the front of a product is more helpful to consumers in making healthier food choices.

Action on Salt branded the findings as being ‘appalling’. A product is regarded as high in salt if it has more than 1.5g per 100g.

The team, based at Queen Mary University of London, found olives in particular breached salt guidelines, which may have been expected.

Aldi Specially Selected Hand Stuffed Halkidiki Olives, sold as 150g, have 5g of salt per 100g, which is double the salt concentration of seawater.

Ginsters Cornish Pasty has the equivalent salt of seven portions of salted peanuts, with 2.99g of salt per portion.

That’s half the recommended daily limit for adults, who are advised to keep salt consumption to 6g a day – around one teaspoon.

Aldi’s Eat and Go Sausages and Ketchup snack contains as much salt as 4.5 bags of ready salted crisps, with 2.2g of salt per portion.

Fry’s Spicy 3 Bean Pasty has 1.8g per portion – the same amount of salt found in a McDonald’s hamburger and fries.

Most agencies recommend eating three quarters of a teaspoon of salt each day, but many adults eat more than that.

An individual-sized bag of chips accounts for about seven to 12 percent of daily sodium intake, so a high salt diet would be the equivalent of eating more than eight bags each day.

The balance of fluids and sodium in the body is crucial to homeostasis, which keeps systems operating in sync.

When there is too much sodium in our systems, our bodies retain excess fluid to try to balance out the salt.

The fluid makes the heart have to work harder to pump blood, leading to higher blood pressure.

Higher blood pressure also makes it more difficult for the heart to push oxygen-carrying blood to various organs, including the brain, which lead to cognitive declines.

Action on Salt said a significant variation in salt content in similar products proved that reformulation of recipes is achievable.

It was also made clear that vegetarian and vegan options are not always ‘healthier’.

The research found one in four snacks are high in salt and would qualify for a red label on front of pack.

When looking at saturated fat, nearly half of products surveyed had worryingly high levels.

She said: ‘Picnics are a British favourite but with all the different salty options on offer, it’s a sure way of upping your salt intake.

‘Eating too much salt puts us at risk of suffering from heart disease or stroke but we are all eating much more salt than the recommended limit of 6g per day.

‘The challenge facing consumers is that most of the salt in our diet is already present in the foods we buy.

‘And so the government must take action now and ensure the food industry improves the quality of their food for the benefit of our health.’

Public Health England issued guideline salt targets for over 80 categories of food in 2014, which were to be met by 2017.

However, analysis by PHE in 2018 revealed many of the targets had not been fully met, and the research found a ‘staggering’ half of products were higher in salt than targets set by PHE.

Action for Salt said: ‘Over the last two years, PHE and the Department of Health and Social Care (DHSC) have taken little action to encourage the food industry to meet the 2017 targets.’