Elderly people who stop taking statins in their seventies face almost a 50 per cent greater risk of suffering a heart attack, a study has found.

Researchers discovered people who stopped taking the cholesterol-lowering pills when they were 75 saw their risk of heart problems shoot up.

Studies on whether statins actually work have been plentiful but the scientists claim theirs is the first to look at the effect of stopping taking them in old age.

They looked at otherwise-healthy people who had been taking the pills to prevent heart problems or stroke.

Millions of people in the UK take statins, which are the drug most often prescribed by NHS, and about 170,000 people die each year because of heart problems. 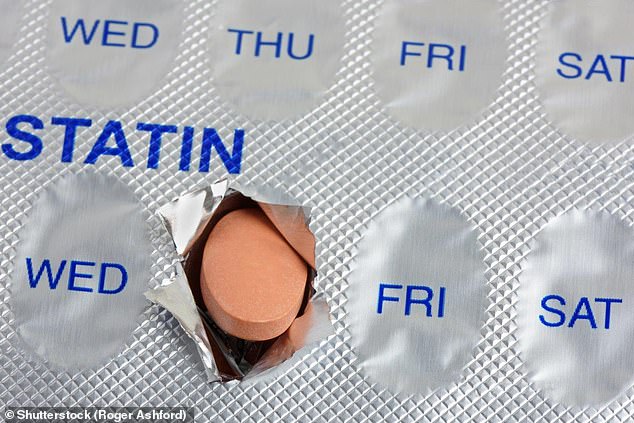 A study of more than 120,000 people in France found otherwise-healthy patients who had been taking statins in their early 70s were more likely to have a heart attack or stroke if they stopped taking the drugs at the age of 75 (stock image)

Since 2014, NHS guidelines have said all over-75s – even those who are healthy – should be eligible for statins.

But of the 5.5million people in this age group, just 1.5million – about a third of those eligible – actually take them.

They had all been taking statins for the two years prior to reaching that age, and one in seven of them stopped taking the drugs during the study.

Those who stopped were 33 per cent more likely to have any type of heart-related health problem afterwards – 5,396 people were hospitalised in the study period.

WHY ARE STATINS CONTROVERSIAL?

Statins are the most commonly prescribed drug in the world and an estimated 30 per cent of all adults over the age of 40 are eligible to take them.

The cholesterol-lowering drugs are given to people believed to have a 10 per cent or higher risk of developing cardiovascular disease or having a heart attack or stroke within the next 10 years.

They are proven to help people who have suffered heart problems in the past, but experts say the thresholds may be too high, meaning benefits are outweighed by side effects for many people.

Nearly all men exceed the 10 per cent threshold by age 65, and all women do so by age 70 – regardless of their health.

Commonly reported side effects include headache, muscle pain and nausea, and statins can also increase the risk of developing type 2 diabetes, hepatitis, pancreatitis and vision problems or memory loss.

And Dr Rita Redberg, professor at the University of California, San Francisco told CNN in January that of 100 people taking statins for five years without having had a heart attack or stroke, ‘the best estimates are that one or two people will avoid a heart attack, and none will live longer, by taking statins.’

‘We estimated that an extra 2.5 cardiovascular events per 100 people would occur within four years among those who discontinued their statins at the age of 75 years compared to those who continued taking their statins,’ said Dr Philippe Giral.

Statins work by blocking the production of cholesterol and helping the body absorb it from the blood to stop it clogging up the arteries.

Experts have called for more over-75s to be prescribed the drugs but many people suffer from side effects including headaches, cold-like symptoms and muscle and joint pain.

The NHS said patients who are prescribed statins usually have to stay on them forever because their cholesterol will rise again when they stop.

And Dr Giral said patients should not stop taking their statins if they are taking the drugs at 75.

‘To patients, we would say that if you are regularly take statins for high cholesterol, we would recommend you don’t stop the treatment when you are 75,’ he added.

‘To doctors, we would recommend not stopping statin treatment given for primary prevention of cardiovascular diseases in your patients aged 75.’

Dr Giral and his team said their research could not prove that stopping statins was what caused people to have poor heart health afterwards, only that there was a link.

The research adds to past work which has found unhealthy patients also have a significantly higher risk of dying if they don’t take their pills.

A study by Stanford University in California found people who only took their statins half the time were 30 per cent more likely to die in any given year than a patient who takes them 90 per cent of the time.

And this risk rises even more for people who stop taking them altogether. Experts called the research ‘powerful’ and ‘impressive’.

‘Although statins are among the most effective drugs for the secondary prevention of [heart disease], low adherence is a common problem,’ the study said.

‘Low adherence [is] associated with higher levels of cholesterol and higher rates of hospitalisation from stroke and ischemic disease.’

The French team’s findings were published in the European Heart Journal.