Scientists have managed to make mice ‘hallucinate’ without feeding them LSD or magic mushrooms.

Stanford University researchers trained rodents to drink water when they saw a vertical black line but not a horizontal one.

They then monitored the animals’ brains to see which nerve cells were activated when the mice were exposed to each image.

The academics then took the images away and activated the neurones – nerve cells – via pulses of infrared light.

When the ‘vertical neurones’ were stimulated, the animals effectively hallucinated an upright line and drank accordingly.

The researchers believe their study will help experts understand how information is processed in the brain. 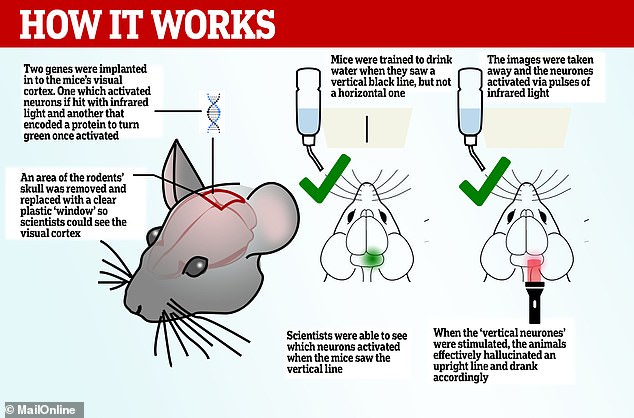 Scientists made mice ‘hallucinate’ without giving them LSD or magic mushrooms

Dr Deisseroth said: ‘Back in 2012, we had described the ability to control the activity of individually selected neurons in an awake, alert animal.

‘Now, for the first time, we’ve been able to advance this capability to control multiple individually specified cells at once.

‘And make an animal perceive something specific that in fact is not really there – and behave accordingly.’

Schizophrenia is a mental disorder that causes psychotic symptoms, such as hallucinations, delusions and unusual ways of thinking.

It is thought to affect between 0.25 and 0.64 per cent of people in the US, according to the National Institute of Mental Health.

And in the UK, around 220,000 people are being treated for the disorder on the NHS, Living with Schizophrenia statistics show.

Hallucinations, whether visual, auditory or tactile, affect up to 70 per cent of schizophrenia patients. However, why they occur is poorly understood.

To get a better grasp on this, the researchers focused on the brain’s visual cortex. This processes information it receives from the eyes’ retinas.

They first inserted two genes into ‘large numbers’ of neurones in the mice’s visual cortexes.

One of these genes expressed a protein that activates neurones in response to a pulse of infrared light.

Schizophrenia is a chronic and severe mental disorder that affects how a person thinks, feels, and behaves.

People with schizophrenia may seem like they have lost touch with reality.

The cause of schizophrenia is not understood and it is believed to be a mix of genetics (hereditary), abnormalities in brain chemistry and/or possible viral infections and immune disorders.

The symptoms of schizophrenia fall into three categories: positive, negative, and cognitive.

Positive symptoms are disturbances that are ‘added’ to the person’s personality and include:

Negative symptoms are capabilities that are ‘lost’ from the person’s personality and include:

Cognitive symptoms are changes in their memory or other aspects of thinking and include:

Figures suggest around one percent of the world population suffers from schizophrenia with around two million in the US.

The second encoded a protein that glowed green when the neurones were active.

To see this at work, the researchers removed the mice’s skulls over their visual cortexes.

These were replaced with a clear glass covering, which gave the scientists a window into the rodents’ brains.

The animals were then exposed to either a horizontal or vertical black bar on a white screen. The researchers watched the rodents’ brains as they viewed the images.

This allowed them to determine which of the neurones responded to the vertical bar versus the horizontal one.

In the second part of the experiment – published in the journal Science – the animals were trained to drink when they saw the vertical bar only.

The researchers then decreased the time between the projection of the horizontal and vertical bars, which left the mice confused as to when to drink.

At that point, the researchers projected holograms onto the rodents’ brains via the window in their skulls.

A specially-designed device allowed them to control exactly which neurones the light particles hit.

Eventually, the researchers got rid of the bar images altogether and just activated the ‘horizontal’ or ‘vertical’ neurones.

The rodents went along with this and drank when their ‘vertical-bar neurones’ were activated, almost as if they were hallucinating it.

‘Not only is the animal doing the same thing, but the brain is, too,’ Dr Deisseroth said.

And the researchers only needed to activate around 20 neurones, or fewer in some cases, to get a hallucinogenic response.

‘It’s quite remarkable how few neurons you need to specifically stimulate in an animal to generate a perception,’ Dr Deisseroth said.

This caused the researchers to question why humans are not ‘hallucinating all the time’.

‘A mouse brain has millions of neurons, a human brain has many billions,’ Dr Deisseroth said.

‘If just 20 or so can create a perception, then why are we not hallucinating all the time, due to spurious random activity?

‘Our study shows the mammalian cortex is somehow poised to be responsive to an amazingly low number of cells without causing spurious perceptions in response to noise.’