Maybe it’s NOT your hormones! Iron deficiency during a woman’s period ‘disrupts their mood and could be a risk factor for depression’

Fluctuating hormones are often blamed for women feeling physically and mentally below par while they are on their period.

But now scientists say reduced iron levels could disrupt their mood and cause them greater irritability during their time of the month.

Lower levels of the nutrient – abundant in dark, leafy vegetables – can cause women to become moody and less motivated, researchers claim.

The Polish team added that an iron deficiency may even be a ‘risk factor for mood disorders’ – such as depression. 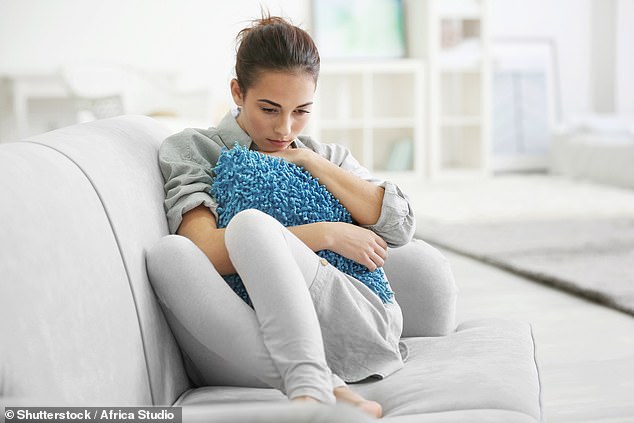 Women who were iron deficient are at risk of mood disorders, and showed withdrawal tendencies, decreased motivation and sensation-seeking behavior

Researchers at Nicolaus Copernicus University also say the drop in iron can worsen their cognitive performance and endurance.

The lack of iron, which occurs because of blood loss, causes the body’s brain and central nervous system to slow down.

According to the National Heart, Lung, and Blood Institute, an estimated 20 per cent of women of childbearing age have iron deficiency anemia.

Researchers at Nicolaus Copernicus University studied 23 physically active women, who were aged between 20 and 32 during their period.

All of the women had normal levels of iron and no signs of anaemia and their mental and physical performance was analysed during this time.

The results, published in the Physiology & Behavior journal, were compared between iron deficient and iron sufficient women.

Women were considered iron deficient if they had less than 12 micrograms of iron per litre of blood.

The study further aimed to assess if iron deficiency effected anxiety levels, which, in animal studies, has proven.

There was no sufficient link between iron deficiency and anxiety, however all four participants with high anxiety scores were iron deficient.

WHAT ARE THE SYMPTOMS OF IRON DEFICIENCY ANEMIA?

Iron deficiency anemia is a common type of anemia — a condition in which blood lacks adequate healthy red blood cells.

Without enough iron, your body can’t produce enough of a substance in red blood cells that enables them to carry oxygen (hemoglobin). As a result, iron deficiency anemia may leave you tired and short of breath.

Initially, iron deficiency anemia can be so mild that it goes unnoticed. But as the body becomes more deficient in iron and anemia worsens, the signs and symptoms intensify.

Iron deficiency anemia signs and symptoms may include:

If you or your child develops signs and symptoms that suggest iron deficiency anemia, see your doctor.

Iron deficiency anemia isn’t something to self-diagnose or treat. So see your doctor for a diagnosis rather than taking iron supplements on your own.